A small diversion from racing cars

When I was at Southern Expo in Hornchurch, I picked up a figure that took my eye. Jon Page of Sphere Products stocks a range of WWI figures by Tommy's War. I was particularly taken by one based upon the campaign that took place in East Africa. The specific figure was of a Corporal of the East African Mounted Rifles in 1915.

It is a very simple figure to put together although it had some large moulding posts that were difficult to remove without damaging the model itself. It also came with a brass tube which looked as though it was to be used as a mount but I couldn't see how that was going to work. When discussing this with Sonja Maes at the Ipswich club last night, she thought that she had used it on her version of the figure but I am still at a loss. Never mind. I cut up a length of an old paint brush handle. This did the trick. The model  went together with just a slight gap around the join between the head and the hat which I filled with my usual Vallejo white plastic putty.

I didn't have a paint of the right colour for any of the major items so I had to mix everything up. You have to be careful when doing this to mix enough because there is nothing worse than having to touch up a part when the special mix has dried in the palette! I had a base left over from the same trip to Hornchurch. This one was of the right size but, like all of the Just Bases bases, it is unfinished so it is very dull. I gave it a couple of coats of Johnson's Klear but this did nothing so I took out my new box of Zero One Two Pack Varnish. Wow! One coat of this and I had a nice shiny base. Brilliant!

Well, here it is. What do you think? A simple but attractive figure that has a great historical interest. 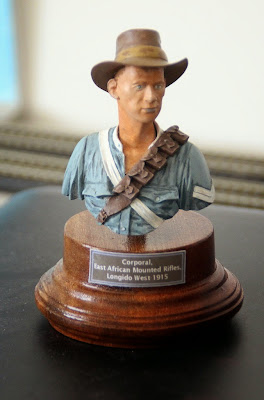 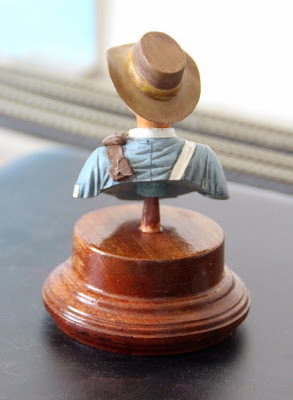 As a final comment, I am not sure what you think but I get the impression that the neck is lightly too long. As I said at the club last night, maybe the guy who made the master was looking at a giraffe at the time - grin.

Posted by Long Haired David at 4:52 AM