Having sorted out my painting station, I decided to give my attention to the cramped situation I was in for actual construction. I was using the desk that held my iMac. As you can see from this image, it was not ideal. 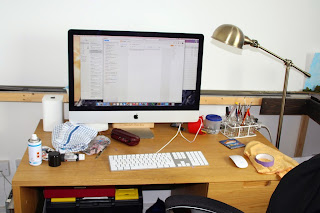 I have already had to change my keyboard because the previous one was covered in paint. Also, there was barely room for a cutting board, let along anything else. Under pressure from my wife, I decided to do something about it. There is no more space in the hobby room - if you look carefully, you can see some of the track from my model railroad along the wall behind the Mac. The railroad takes up a lot of space; then there are two upright freezers and my bookcase. As it is, the railroad is fully kitted out with storage underneath as well so I had nowhere else to go in this room.

The decision was taken that I should move my actual modelling onto the dining table, whilst carrying out the airbrushing in the hobby room with the use of my newly constructed cabinet. There were two issues.


Valerie already had a very nice floor standing lamp fitted with a daylight 6 watt 6400k LED cob lamp which was perfect to light her jigsaw table. We had bought this when at a craft show at Duxford from the Craft Light company in Lowestoft so off I went and ordered another one. I then remembered that Sphere up in Martlesham made things using 1/4" MDF and a laser cutter. I sent Jon an e-mail laying out an idea for a workstation incorporating an A2 board. It was only after I sent it that I realised that he already sold such things and hence my e-mail sounded very patronising as I had described it in detail. I popped up to see him and apologised - smile. He understood and together we came up with a design that would incorporate an A3 board and have holes cut out specifically to hold the various sizes of Zero One paints that I use for my car kits. He did an incredible job and one week later I collected it from his shop.

Here are the workstation and the light: 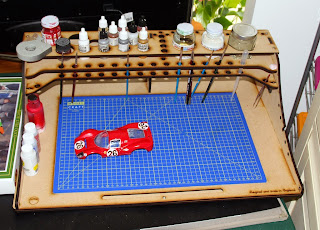 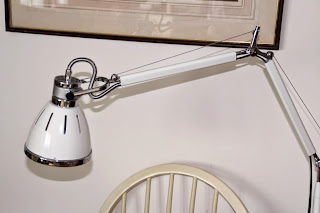 So, now I can store the workstation on my jigsaw table - as in the picture - and heft it onto the dining table as and when I want. The light is permanently there so I can be all set in about 2 minutes. I can then set up the airbrushing workstation just as quickly because my nice Iwata PowerJet Pro compressor is situated down by the side of my desk in the hobby room with my Iwata HP-CH and my Neo airbrushes both hosed in and ready to go.

How could it be better?

Posted by Long Haired David at 7:17 AM