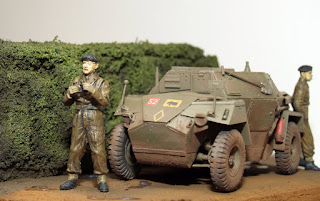 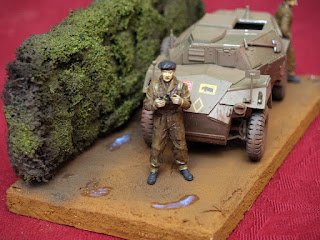 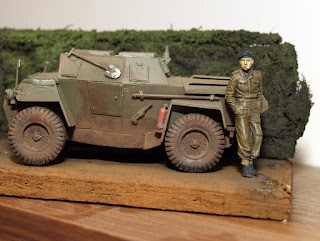 The Scout Car was painted in Xtracrylix British Khaki Drab. Weathering is thinned Tamiya Flat Earth and then applications of Tamiya thinners onto which was dabbed, poured, rubbed - MIG Dark Mud. The base is a bit of OSB (oriented strand board) I had sitting out in the garden. This was covered with my favouriteVallejo Pumice, de-frosted in the microwave to speed up setting, and then painted Vallejo flat earth with some Vallejo Leather for detail. Puddles are Vallejo gloss varnish (still to dry in these pictures, hence the white colour. I am probably going to give the road a final coat of Vallejo satin to give it an overall wet look. The bocage hedge is two Scotchbrite scouring pads, torn and fixed together for depth and then overlayed with some small torn pieces to give it some 3d texture. This was then coated with Games Workshop grass and the the depths were sprayed with Vallejo Olive Drab!

The figures are two of the new SKP figures. The officer with the binoculars has had the binocular straps added. These were made from wine bottle metal cap. The driver figure has had a small amount of .4 steel wire inserted (painful) and then painted off-white to represent the cigarette.

This has been a fun project. This little kit, although needing a bit of cleaning up on each piece and careful positioning, due to the lack of alignment pins, actually went together very well and I think looks the part. Its a tricky complex outline but I think they have got the look dead right. It looks ugly but useful, which is how it should be.

A couple of pieces of advice when making this kit.
1. Dry fit all the wheels before mounting the mudguards. I didn't and got one mudguard in the totally wrong place so I had to take it off, make good, and refit it. Also, one of the real wheels is touching the mudguard as the guard is about 1mm off its right position. By dry fitting the wheels when you fit these, you should get all the mudguards in the right place.
2. Don't fit the spare wheel mount when they tell you to. There is zero chance you will get the position right and, in any case, you will want to paint the wheel off the model before fitting it. Leave it off until the end. Then fit the mount to the wheel and lastly fit the whole assembly to the car, getting it positioned correctly between the mud guards.

One bad point is that the etched brass for the jerry can racks was way to large for the jerry cans and would have looked stupid. Both I, and Bob James - from the Ipswich club who is also making this - have as a result left the jerry cans off. It seems that not every one did carry them so that's alright but it would have been better if the racks had fitted.

One a point of accuracy, most people I have spoken to don't like the twin brens fitted with the standard magazines. The feeling is that drums would have been better. As a consequence, I have left off the guns.

With all that said, I loved making this.
Posted by Long Haired David at 10:52 AM No comments:

Got going on the Humber again

Having found that I had put a wheel arch in the wrong place, I stalled for a while on the Humber. I got going on the first rail wagon for the Morser. 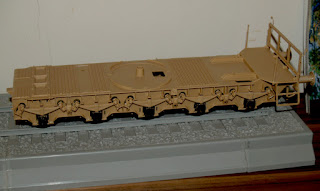 This is a usual Trumpeter kit so goes together very well. The springing of the chassis is complex but I got there having broke only two pieces. Thank goodness that MekPak is so good at sticking these tiny bits back together.

However, with the next club nights looming I decided that I would have to do something with the Humber so... 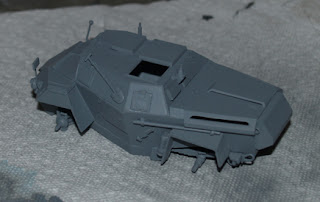 I got the mudguard off and started again.I did stick the spare wheel on until I realised that it would be much easier to paint off the car. Well here we are in primer. Tonight I start the paint job proper. 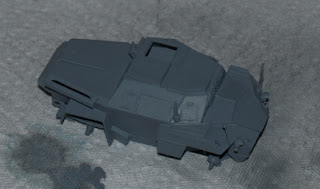 Posted by Long Haired David at 7:43 AM No comments: