Recently, I completed a project for the US insurance company that uses my programming skills and the fee turned out to be a bit more than I expected so I decided that I would treat myself. I have been concerned for some while that the only lens that I have for my camera is not up to the job of producing high quality images of small scale models so I went looking for a replacement. All of the advice that i got pointed me towards a macro lens. Macro lenses are designed for taking photos of small items and enlarging them with excellent quality. With this in mind, I asked on a few forums and the result was that I should look at a macro lens of around 90 - 100mm focal length.

On Friday, I went off to see Wex. They are up at Norwich and are only one hour away. They have a fantastic warehouse full of goodies.  Unfortunately, I forced the conversation my way. Firstly, I took a model along and only talked about photographing the detail of it rather then the whole thing. Secondly, I told them that I was looking at macro lenses so, guess what, I ended up buying a 105mm Sigma macro lens.

I got home to find that it took great images but enlarged everything so much that I had to stand a good way away to get a full model into the frame. I kept remembering John Rose's Israeli F-16i Sufa. 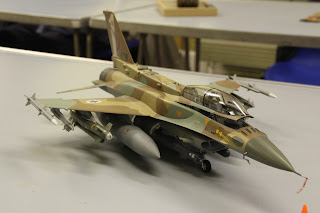 This beast is over 18 inches long. I would have had to stand 10 feet back from it to get it into the frame. I realised that I had talked my way into a mistake. I think that I knew what I had done as soon as I got home as Valerie asked me why I wasn't dashing to play with it!

I took it back next day. I explained how I had forced the conversation and this time I let the sales guy do the running. He spent a lot of time checking up on minimum focus distances and finally came up with the Canon 24mm f2.8 IS USM lens. IS means that it has image stabilisation which will help when I hand hold the camera to get a shot of a cockpit or such lie. USM means that it has a very quiet focus mechanism ( not so important) and 24mm means that I can get John's plane in full fame from about 2 feet but I can still focus down to 8 inches when I need a close up. The only trouble was that it was a good bit dearer than the lens I took back. Oh well. At least I now have something that will improve my images and give me less work and stress after the club meets. Here is my test image. 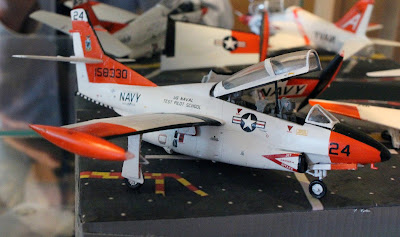 This is a cropped part of that image: 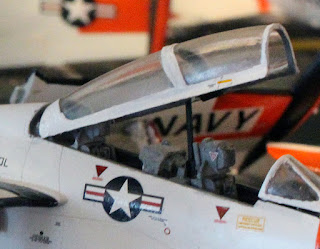 Here is a close up using the very close focus of the lens. 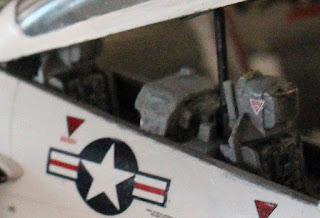 This is what I was after. A good overall shot and some close detail.

Now to my Trojan (T-28). This is a Sword kit and thus has no alignment pins or, quite often, mounting holes. It takes time to get it together but, given that time, it is a nice kit.  There are some silly things like the two control sticks in the cockpit are supposed to mount to the floor using butt joints! I drilled small holes to take them. The same is going to happen with the undercarriage. Also, the tailplanes are butt jointed. Thank goodness that Plastic Weld has a quick grip and very quick setting time. I have got to the point where I have given it an overall coat of white in preparation to checking all of the seams etc. Once happy, I will give it a final coat and then mask up for the red.

Here are a few work in progress images. 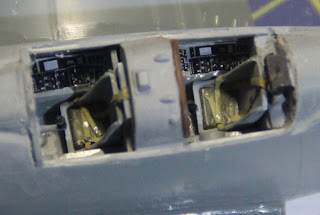 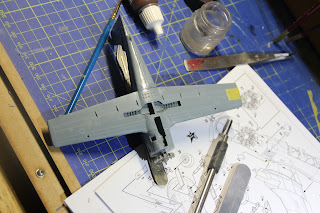 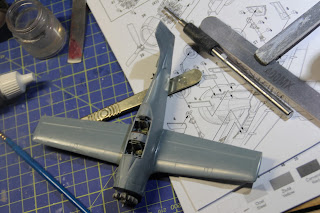 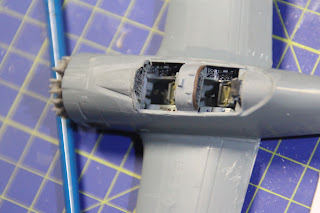 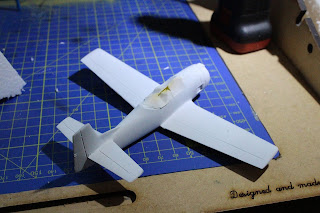 Posted by Long Haired David at 9:24 AM No comments:

I am doing things!

But just not writing about them. I moved at the end of January and started  a new course at the Open University at the same time so modelling has been an "as and when" activity for the last month.

I have three projects on the go at the moment and seem likely to dump one of them.

The first project is the "Vietnam Scooter". This is the Eduard limited edition that I bought with such enthusiasm last year. It was at decalling stage at the Wivenhoe show but since then it has languished a bit, for some good reasons. Here it is in its current state. It has all of the stencils and markings and the overall paint job is done. I need to touch up the undercarriage. But:

If you look carefully, the stars and bars are put on incorrectly. They should be lined up with the airbrakes but I didn't realise that until a few weeks afterwards. Also, there are two stencils that show where a lift hook can be attached on this visible starboard side.  Here is a close up: 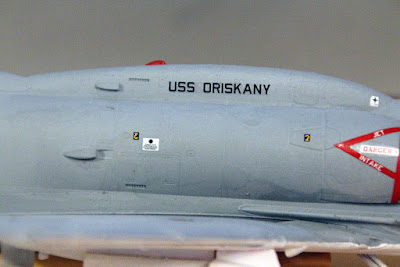 They are different ways up. They should both be as the one on the right. I can put up with a lot in a model in that I don't go for absolute accuracy, for instance, but when there is a glaring error, I get upset. I think that this one is for the bin, unless I can steel myself to finish it and put it at the back of the shelf.

The second project is a Hasegawa B-25 Mitchell which I am doing up in Dutch RAF colours. This means Dark Olive Drab over Neutral Grey, D-Day stripes with RAF roundels and Codes. I really wanted a dark green/dark brown over black set up but couldn't find the right decals. It has gone slowly and, so far it is in good shape. I forgot to take early photos so here is the first available image. 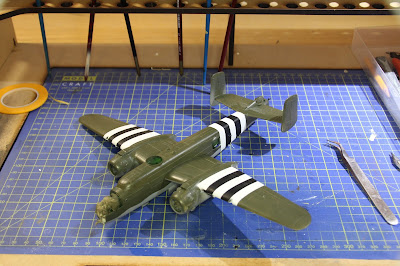 I am back using my brilliant Iwata HP-CH after messing around with the little Neo. I can't think why I used the Neo unless it was because I could take the cup off and put just a tiny amount of paint is so the cleaning up was quick. The Iwata sprays brilliantly. I did have a moan at Southern Expo when buying some new stocks of masking tape that they should make 8mm wide as well as 6mm & 10mm as 8mm = 24" in 1/72 which is the width of D-Day stripes! I had to trim all of the masking down from 10mm tape.

(secret admission - the Mitchell I have is the wrong one for the markings but as I only have one Mitchell and one set of markings...).

My last ongoing project is a T-28C Trojan. This is part of my  US Navy Trainers display and is the Sword boxing. 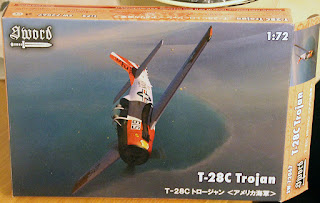 I have been working on the cockpit. I spent a lot of time on Thursday painting the cockpit (under my magnifying light) only to find, today, that there are decals on the sheet. I have scraped all the surfaces and put these on. 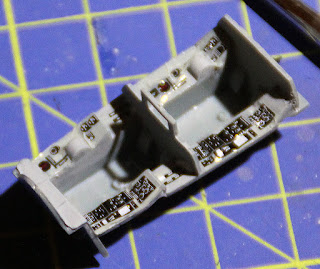 More to come. Keep checking. I will not give up on modelling or my blog.

Posted by Long Haired David at 12:51 PM No comments: