Here are the two models I talked about a few days ago. They are now done and dusted! 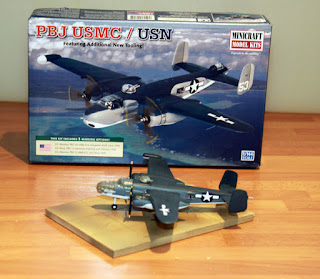 I bet you are sick of hearing about PBJs. Well here is my finished 1/144th Minicraft kit. As I mentioned, I had a 'disaster' in that one of the side gun windows fell into the body of the aircraft leaving me a little short to finish it. I got hold of some 1.5mm clear poly sheet and cut out two new windows (I did two so that they matched). 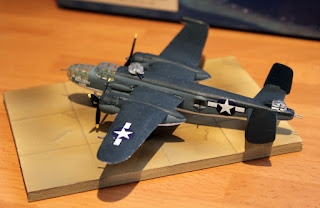 I had a problem with the guns as the 1/144th moudlings left something to be desired as they were very thick and had lots of flash. Hence, I have replaced all of the guns with some brass rod. These look much more in scale. I came up with an idea to fit the barrels to the side windows. Heat up the rod and let it melt it's way through the plastic. However, this clear poly is very hard so I was only able to get the rod sealed into the panel - not to get it all the way through. Still it looks fine now.

Hey - that's another aircraft finished to a 'reasonable' standard. I must be getting better - grin.

SS Panzer Crewman
Here he is. I am very please with this one. I had some real worries about the camo smock. Mike Grzebian kindly sent me some pictures which helped but in the end I just had to go for it. When I put the original background patches on, it look like a cartoon. I then added the splinter blotches which made it look worse. I then had a brainwave. I took some Tensocrom Oil filter and gently sprayed that all over and - bingo - a toned down result that I think looks the part. You are welcome to differ of course - all criticisms gratefully ignored. 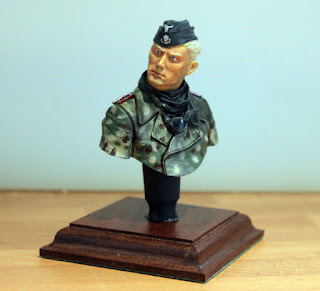 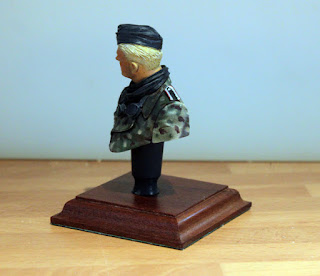 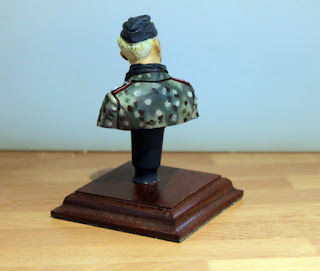 I have the 1/72nd Mosquito on the go - just sprayed the cockpit background colour and have part of the wings put together. I also have another Laser Cut wood kit for a building on my railroad. As usual, progress pictures will appear as and when.

If you were at all interested, I finished the Shaker Tapestry Cushion and have now started on an even more complicated one. This one is about 30,000 stitches! 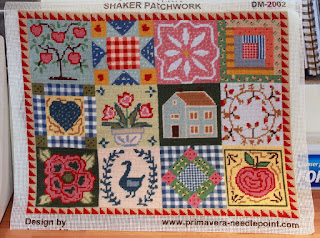 The next one is even more. It has a border that I reckon will take 5 evenings to complete a single side = 20 days just to do the border! This is the product shot. 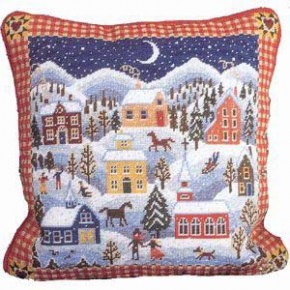 Nice little PBJ - or Mitchell to most of you

PBJ-1H
If you can remember that far back, I made a Hasegawa Marine PBJ in 1/72nd. The Mitchell has always been one of my favourite aircraft but I have never seemed to get around to making what I regard as a classic - an RAF B-25. However, I have now made 2 USMC PBJs. What I like about USMC aircraft is that they always up gun them. PBJs have 4 extra MGs - 2 on each side just aft of the cockpit.

Now, having made a nice 1/72nd version, I came across a Minicraft 1/1/44th so had to make that. However, I only got some way with it before stopping - better things to do! Last month at the club, Eric brought along a 1/144th B-26 Marauder which prompted me to get my PBJ out again.

Well here it is. The last one I did, I based in New Guinea so I heavily faded and dirtied it up. This version (albeit the same aircraft) appears as it did when based in Hawaii (one of my favourite spots on earth having been there 3 times!). So good old Raggedy Ann gets another outing. The real reason for doing Raggedy Ann is that the other options had either a solid nose or a re-designed nose - and I like the classic Mitchell look.

You might like to note the 20p piece in the photo - for those of you outside the UK a 20p piece is just 20mm across. It is not quite finished. There are windows to go into the side gun bays. However, when fitting the port side one, it dropped into the body and I can't get it out. Soooo - I have to make a new pair out of clear poly sheet. Oh well, so it goes :-) 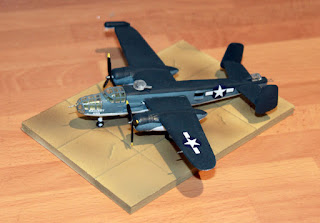 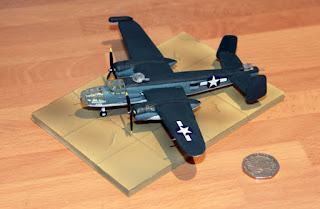 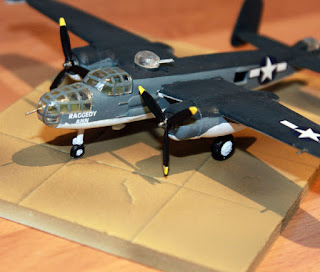 Airacobra Finished
I forgot that I hadn't posted any piccies of the P-39 in its final state. Here they are. Again, it is based in New Guinea and is suitably faded, as one would expect a matt black nightfighter to get in that heat and rain. It is sat on a sheet of PSP (pierced steel plank) which is what the Seabees used to lay down airfields quickly. This has quite a bit of etched brass and I am quite pleased with the cockpit - not that you can see much of it but it is nicely painted and detailed. there is even a coil of wire attached to the radio behind the seat. 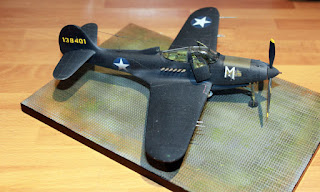 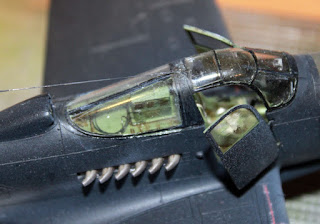 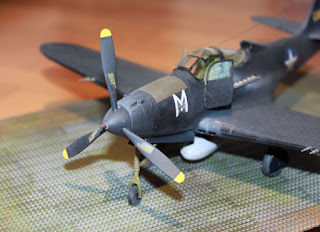 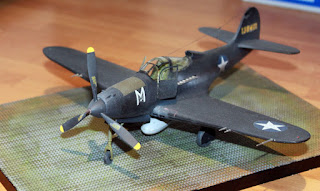 SS Panzer Crew
On the basis that I am never very happy unless I have a figure on the go, I decided to move out of my comfort zone and tackle a late war SS  three colour camo smock. So here it is. Not finished yet but getting close. As usual, it is a 1/10th scale bust by Young Miniatures and is made out of resin. Again, as usual, it needs no fettling and can be painted out of the box. 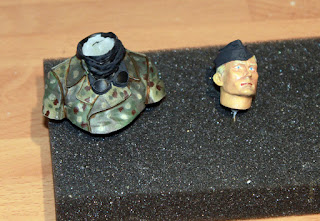 I will show more of this when it is finished.

What's next?
I have a Tamiya 1/72 mosquito on the stocks which I am doing in civilian BOAC markings (wartime though). If you don't know the story, then check back for a full description.

After that, I have been left with a battered box of an Airfix Hampden in 1/72. Now I remember Matt Braddock - of Rover Comic fame and from my childhood - flying one of these. Maybe I can do four aircraft in a row without ditching one of them! Oh, did I say - the F-16 SUFA hit the dust. I decided that it was non-recoverable. I will try again sometime.