The Alley Cat Gannet AEW3 continues to progress - slowly. It now has decals.

Once these have a coat of Klear I will start on the undercarriage and the propellers. 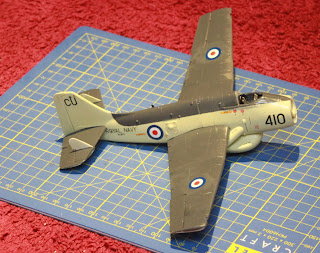 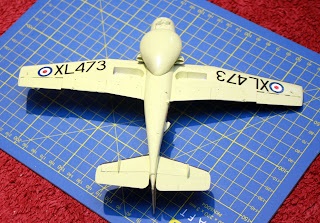 I know it was April 1st the other day but this is not such a good joke. I got this kit in the post the other day from my friend Ken. He is great friends with Czechmaster resin and has got me (another!) free kit.

Oh boy, can he pick them. 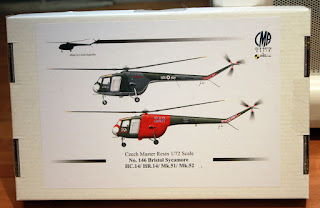 This is a 1/72nd resin Bristol Sycamore. Hummm, this looks quite delicate but as I have enjoyed the last two resin kits, I am actually looking forward to making it. However, check out the next photo: 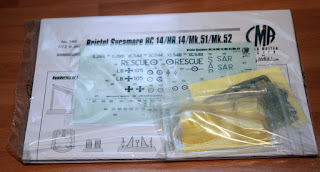 This is the pack with the instructions, decals and canopies - yes - gulp - that is a set of vacform canopies. Oh hell, here we go again.

The actual model doesn't look at all bad - in fact the mouldings are absolutely first class. I am a bit worried about the strength of the rotor blades but I will just have to be very careful. 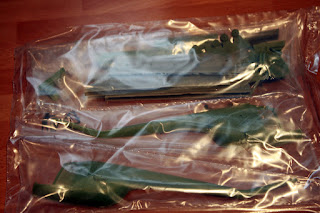 I think that this is going to make a Gannet wing fold look easy. In the meantime, I am going to carry on with decalling and also working on my nice BIG 1/12th Shelby Mustang

Posted by Long Haired David at 8:04 AM No comments:

Here are some photos of the current state of play with the Gannet AEW3 and the Seafire 45.

There has been a lot of heartache in getting the two colours on with a decent demarcation. I haven't enjoyed this bit at all. I am now decalling up both aircraft and then will get the undercarriage etc. on to them. 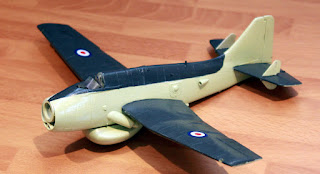 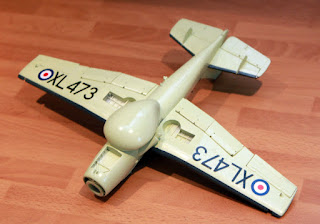 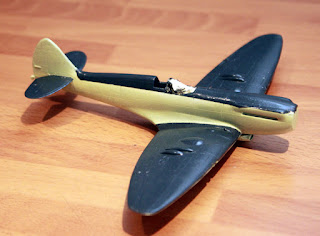 Posted by Long Haired David at 7:57 AM No comments:

Time off for a bit of navel gazing

I have been spending some time thinking about my modelling in terms of showing other people.

The vast bulk of my modelling gets seen in one of two ways (used to be three ways - more about that later). My activity gets seen incrementally on this blog and as a finished article at IPMS-Clacton. I have been fussing recently about the quality of my aircraft model finishing and why I am hesitant to take models to Clacton but have no problems showing all of my errors, mistakes and poor modeling on the blog.

I think that the answer comes down to the fact that when I take a model to Calcton, I am effectively saying - hey look at this that I made - isn't it good!. When I put something on the blog it is more like - well this is how it is so that you can know that you make the same stupid errors as I do - I sort of assume that your modelling skills are better than mine in this display. As I almost never think that my finished model is 'good' then Clacton is a bit of a cheat because they are either being kind or not applying hard rules.

The problem is that I think that my modelling is going backwards and I can't work out why that is. I have a lot more difficulty now when making aircraft than I ever have and am unhappy with my results almost 100% of the time. However, let me build a tank or a car and I seem to be able to produce a good result. I used to say that tanks were easy as there are no high definition camo finishes etc. so you can always fudge things, but that doesn't work for nice shiny cars and I seem to be able to finish them to my satisfaction.

What is worrying me is that the blog actually lets me get away with rubbish modelling because I use that as an example of how not to do what I do. So - maybe I am getting away with slacking by using the blog. This is where the monthly club competition at Ipswich was, maybe, a good thing for me. I thought that I was glad to be shot of the problem of producing to (my) high quality each month 'just for the competition' but the reality may be the opposite - that the pressure of the competition meant that I strived for better results with each model. I also used to moan that I was being pressured into producing something every month but again the reality is that I do not do anywhere near as much modelling as I used to because there are no time frames to work against. This is why some of my best models in recent years have been sent to Dan in the USA - quality had to be good as it was a present and it had to get there at least within shouting distance of Christmas.

So where does this leave me? Wanting to go back to the Ipswich Club - no way. Setting deadlines for models to take to Clacton (and stopping relying on models I made in the past to fill the current gap) - yes possibly. Waking up and smelling the coffee for my own sake - yes definitely!!

I knew I wanted to try and rationalise my problems and putting them down on paper(?) seemed the best way. So, I must now do what my wife tells me and take my modelling seriously and do much more of it.

Thanks for listening.
Posted by Long Haired David at 7:44 AM No comments:

Oh Boy - I have found a new mission in life!

Remember the Revell Shelby Mustang that I made for Dan - well that was in 1/24th.

There was a new kit released from Revell this week - the same car but in 1/12th - Yup - 1/12th. That makes it twice as big in every direction. This was a must have as soon as I saw it. I am on holiday for the next week so I can see this becoming a fun time.

Here are two shots - one of the box - see the stapler set there for scale purposes. The other shot is of the inside of the box. I hope you can get some idea of the scale of the body, the size of the decal sheet and the large number of parts. (Click on each photo for a bigger image)

Tonight, the chrome gets stripped off and it all starts off. I can't wait. 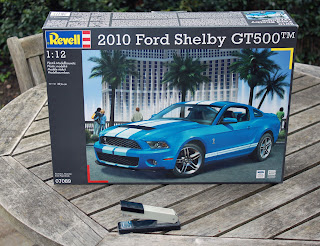 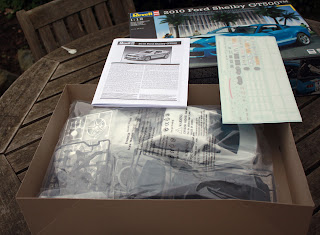 Posted by Long Haired David at 8:31 AM No comments:

Onwards and Upwards with Seafires

This is the next Seafire - well actually in date order - the earlier one. This is a Seafire F.45. It is as much fun to build as the previous one - in the sense that it needs a good bit of work but responds well to the effort. Here it is in white primer - first coat to find out where the filler needs to be improved.

The tail planes are resin so I was a bit lucky to get them on straight as I had to use super glue. The bottom of the fin had to be cut off and a resin base fitted (with a hook included). The kit itself is for a Spitfire so you get a new fuselage and a few resin bits to convert it. It all works out quite well. 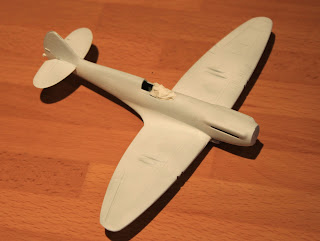 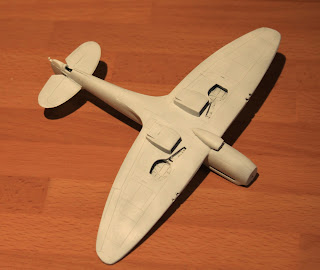 Posted by Long Haired David at 8:26 AM No comments: