Even more of a meantime and then...

I picked up an Italeri Spitfire at my local Hobbycraft, not realising that it was a bit of an unusual one. It has very pointy wing tips which were meant to help it climb and operate at very high altitudes, hopefully to be able to stop German reconnaissance planes. However, it doesn't have the classic Spitfire look but then, this was all that they had. 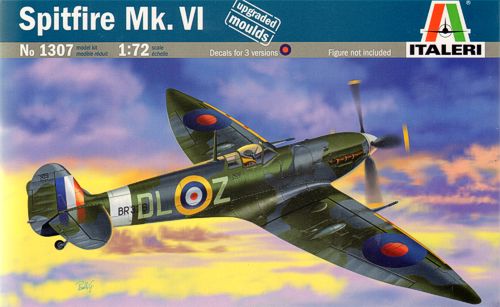 Quite weird! Still, as the Ferrari paint wasn't due until Monday afternoon - and I have the modelling bug again, on I went.

First problem. It states that the cockpit should be Zinc-Chromate - but this was an American finish and certainly not used on Spitfires - even I knew that!  (Or -as "any fule kno" - to quote Molesworth).) I thought that we had our own 'cockpit green' which I remember as being quite light so I substituted "Sky". I talked about this with my friend Mark (the Aviation painter - see Brunswick Fine Arts) who fished out a book that showed that I was more right than Italeri. Anyway, I got a little way in, and then the Ferrari paint came. 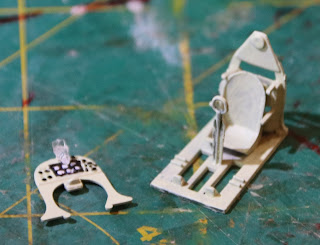 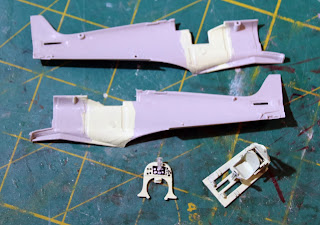 I am now back on the LaFerrari. What has happened? For the last few years I haven't sat down to a model for longer than 30 minutes on any occasion and then, today, I started at around 2pm and, here I am at 9.30pm, still at it. It must be that Tamiya moulding that does it. Plus, my airbrush is now working faultlessly so I can spray away, change colours and everything.

I am still working my way through very carefully. I haven't needed to open the new paint yet, so I could have got on yesterday. Anyway, this is where I am at the moment. 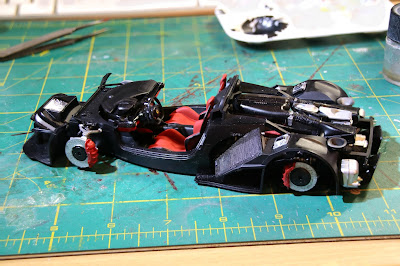 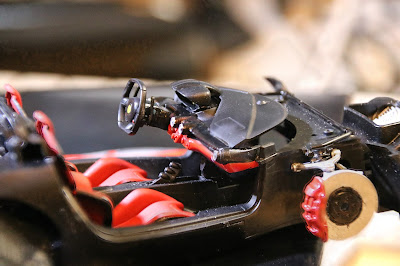 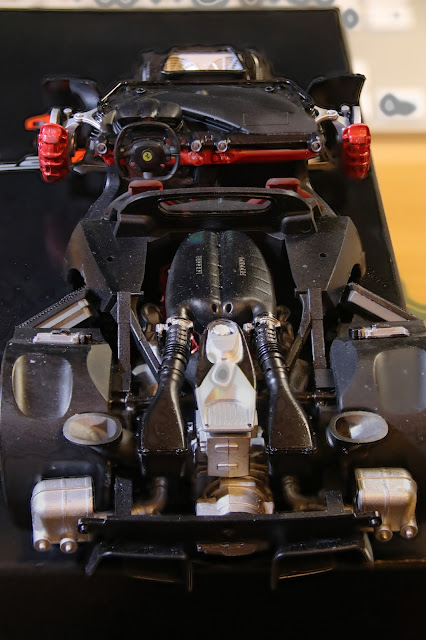 (Click on any image to start a slide show)

Tomorrow, I shall need to start using the Zero Paints. That should be fun, and smelly!
Posted by Long Haired David at 2:51 PM No comments:

Something to do, meantime

I am a bit stuck on the LaFerrari because I don't have the right Ferrari red. The only one that I have is for racing cars from the 60s. I have order a bottle but it won't come until Monday and I now have itchy fingers for making plastic models again.

I had a look around my stash, such as it is, but having two cars on the go, fancied something different. I went looking for my half completed 1:72 scale Trojan T-28 but I seem to have disposed of that. I wanted something simple so didn't fancy tackling the Sword Seastar - the only aircraft kit lest (so I thought). These Sword kits are tricky to make and I am in the mood for some easy builds having got into the Tamiya LaFerrari.

First off, I did some repairs to existing models - I glued a wing back on the Buckeye, a wheel back onto  the T-45 and found a spare prop blade and wheel for the Supermarine Seafire. Having done those little jobs, I fished out a 1:144th Revell P-47D that has been sitting there for years. I have a nice little collection of 1:144th aircraft so this would fit in nicely. 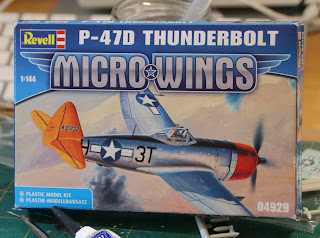 This is tiny - just 70mm long - and very few parts. First off, the fuselage was put together. 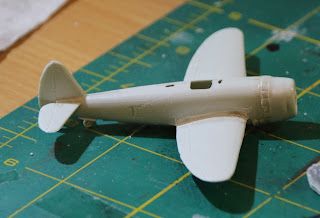 This got a sprayed on coat of silver and then was masked up for the coloured bits. 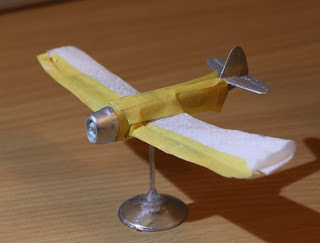 I had to cut a little mask out for each side of the fin as, when they painted the tail, they didn't want to repaint the serial code so they masked that off giving the code a silver background. I then sprayed the red nose and, looking at the box art, got out some orange for the tail. Having sprayed this, something didn't look right. By checking with the instructions (maybe I should have done that before!), I saw that the box art was wrong and the tail should be yellow AND! I had sprayed the tail with fluorescent orange - no such thing in 1944! It was then that I realised that the only bottle of yellow that I had was a Vallejo one and the bottle was empty. After all those years of owning a model shop, it seems very strange having to buy paint. Normally, I just took what I needed off the shelf. Sunday morning, 10.30, I was off to my local Hobbycraft to get a bottle of Tamiya yellow. As mine was the last model shop in Ipswich, there is now nowhere that I can buy paint off the shelf, unless I want Revell or Humbrol. Thank goodness that Hobbycraft opened last year as, at least, I can now buy Tamiya easily.

Anyway, 8 miles to Martlesham and then 8 miles back with one pot of paint. Well, actually, I bought a silver marker and an Italeri Spitfire Mk. VI (in 1:72) as I would like to get back to doing a few small aircraft.

I sprayed the tail silver again, as I still have to have a silver background for the serial code and then re-masked the tail for the yellow. That is where I am at this moment. 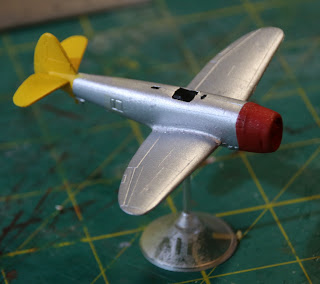 When the yellow is dry, I will un-mask the serial code area. I will then be able to put the decals on and finish the kit off.

There was a lot more faffing around I had forgotten to paint the black areas on the fuselage upper surface. Extra to that, I needed to paint the propellor. Thank goodness my airbrush is now behaving as painting yellow would have been a longer process without it.  here we are then - the finished article. 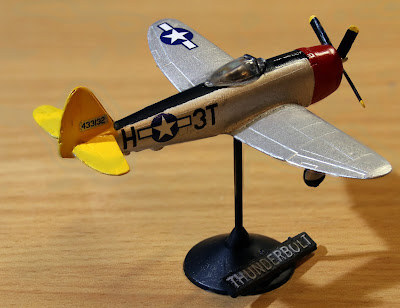 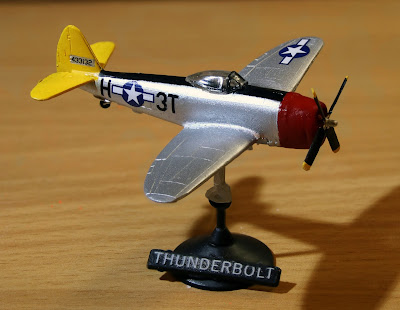 Posted by Long Haired David at 7:40 AM No comments:

I love Tamiya kits. This is just going together so nicely. Mind you, I am taking it slowly and carefully. I am not making my usual stupid mistakes (well, just one - I have left a poly cap out of one of the wheels so it will have to be glued in place).

I have had to buy a couple Tamiya paints to do the kit. This must be the first time that I have bought Tamiya paints since we started the shop in 2006. I had to buy a pot of XF-7 red to get the right colour onto the rocker covers. Talking paint, I have to buy the correct red for the car. Checking with Hiroboy I am told that this is Corso Rosso 322. Hiroboy can mix any known car colour, provided that the mix is in the database and they have a good record of which red was used when by Ferrari. This is a Zero Paint, which needs special thinners, etc. so I have placed an order with Hiroboy for the paint and a can of thinners. I have also purchased the specific yellow that goes with the Chevrolet Corvette C7 for which I have the Revell kit. This will be my next car project after the LaFerrari and finishing the M3.

Anyway, this is where I am now (with a few sequence shots along the way). 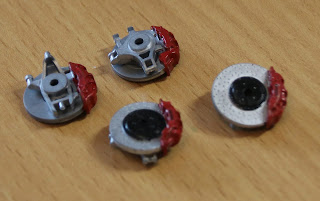 Posted by Long Haired David at 10:00 AM No comments:

I had a lot of trouble with my airbrush last time I got it out- from the BMW - so I have been a bit less keen to get on with a white car. In fact, the main reason that I stopped was because I found out that there were 100 decals to be placed and I couldn't find my Johnson's Klear (which I use to bed the decals down nicely).

Each time I have got the kit out, I have remembered the airbrush problems and put it back again. I have been busy with my railroad (Gentle Model Railways). I have had some software issues with my routing software. Finally, I have decided to stop spending 10 hours a day sorting out the issue and get on with something else. That something else turned out to be the Tamiya La Ferrari that Wendy bought me for Christmas. 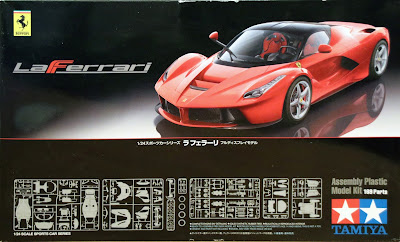 I started work on the engine. Like all Tamiya kits, if it doesn't fit then you have got it wrong. With this in mind, I reseated a couple of parts (rocker covers) and finally had to find some red paint for them. It seems that the only decent red paint that I have is a Mr. Color bottle. I forgot that this is enamel and takes forever to dry! Eventually I got my fingerprints off!

This is where I left it last night. 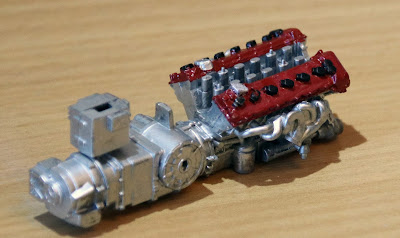 Today, I sorted out my airbrush - gave it a down and dirty clean right into the little bits you don't normally clean. It now works fine - thank goodness. It is, after all, an Iwata HP-CH.

I have given three sprues a good working over with appropriate paints - black, aluminium and white primer (ready for the Ferrari Red). 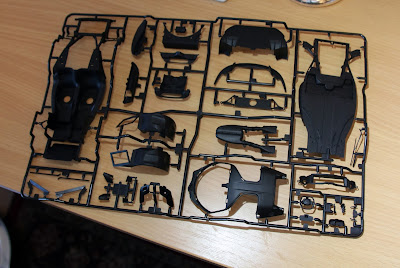 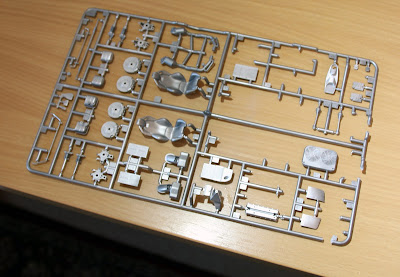 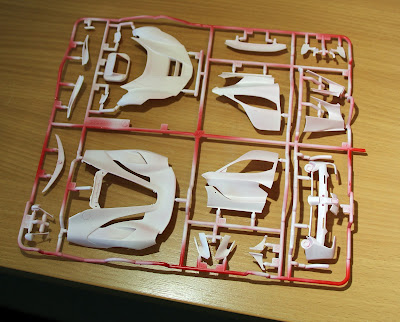 Posted by Long Haired David at 11:30 AM No comments: