I don't know why I don't just create a blog template for what I am going to say now.

Well, that was a disaster! So, what went wrong? Just about everything that could be imagined. You wouldn't believe that I have been making plastic models for 57 years, would you?

OK, so let's go through it step by step.

1. I spray the body with a good coat of Vallejo white primer. With the addition of some varnish, this will be more than good enough.

2. I then try and find the metal strips that they give you to provide the chrome that Jaguar fitted to these bodies. I eventually find the 40mm x 10mm sheet stuck to the carpet at my feet. This is a good start. These strips are very stiff metal and are supposed to come away from the backing with some glue attached. Well, the first one didn't so that was that idea squashed. Now, I have to think of another way to go.

3. I get out some 1mm masking tape and very carefully go around all of the areas that have to have chrome fitted. These areas are around a half of a millimetre wide so it is a fiddly job. I then have to fill in all of the rest of the body with tape before I can spray up the chrome. I give the body one coat of flat black primer; one coat of gloss black primer (as recommended - I find that the new Vallejo gloss black primer doesn't cover very well so I put a flat black coat on first). The last coat of Vallejo Chrome goes on and I leave it a suitable time before removing the tape and finding that - the black primer has bled everywhere below the tape!

4. I have a brain wave - why not just paint the body black and hand paint the chrome. That can't be too difficult can it? Er, Yes! The black goes on fine but I make (as expected) a pig's ear of the hand painting! I also forgot that the racing numbers were black circles with white lettering so, with a black body, I would have to make my own racing numbers - I have been there before.

5. Back to white then. A quick respray and a decision that I can live without the chrome - who would know as everyone expects a racing car to be stripped of non-essentials. Aside - Jack Sears used to drive this car home after the race. All that was changed from a standard Mk.II Jag with a hotted up engine was the racing tyres so the chrome, the radio and all of the seats stayed!

6. I now realise that I have about 2 inches of paint on this body and it looks awful. Time to strip the body back to the plastic and start again. It seems that I can peel the paint off with my finger nails. That's how thick it is. Here is a picture 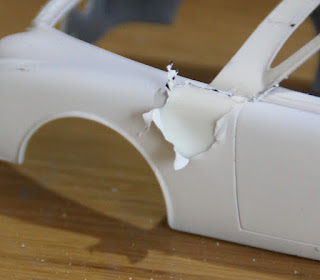 7. Having got the worst off, I have a good go with MicroMesh and got the body clean again. 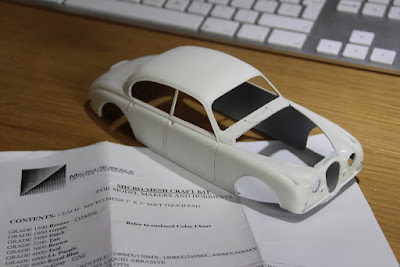 8. I carefully respray it once again and put the decals on. Three coats of Two Pack result in a body that doesn't look too bad so I proceed to add all of the chrome parts, using Gator's Grip. I use the same glue to fit the windows but here I am let down by Tamiya for once. The fit of the side windows is terrible and I have to have about 10 goes at fitting them so that they stay in place. I am also plagued by various chrome bits falling off such that I eventually lose the light fitting over the rear number plate!

9. I have one last go at fitting the offside window in place securely - and get glue on the glass!

By the time that I got it to the club on Thursday, I had also lost one of the chrome wheel nuts. I had purchased a sheet of Bare Metal Chrome to try and fit the missing strips but I didn't seem to be able to do that to a decent standard so I dropped the idea.

Repeating all of this at the club made me realise that I have had a torrid time of it with this kit and that I felt like throwing it away. It was suggested that I might like to buy another kit and have a 2nd go at the body. I did this with my Ferrari 330P but I knew that I would only have to confront the same issues once again.  I feel that I have made a really good job of the chassis and the interior, as you can see. 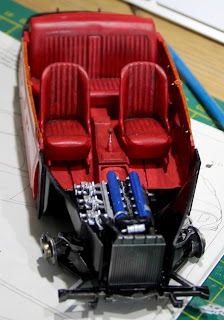 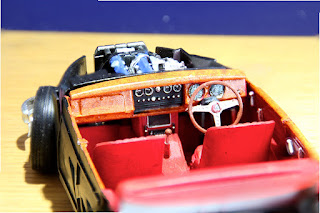 Thus, having brought it home, I have decided to keep it and have put it in my cabinet as a split display of the chassis and the body, with the body nicely arranged so that the best bits show! 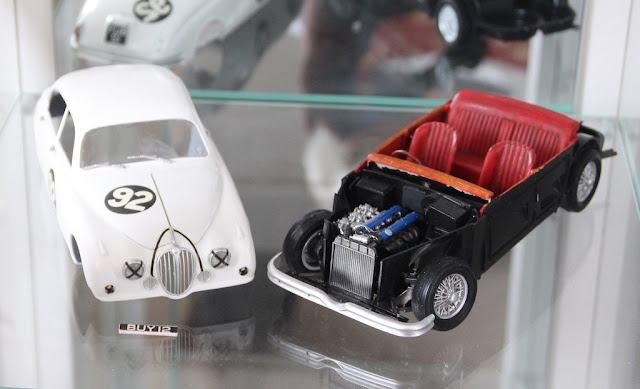 I have decided that I will give cars a miss for a while and go back to aircraft. I have a nice Eduard kit called "Vietnam Scooters" that I picked up at the Billericay show. This was originally a Hasegawa kit so it should go together well and has lots of etched and resin thrown in. Oh well - here we go again! 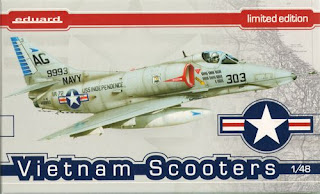 Posted by Long Haired David at 2:24 AM No comments: