Quite a lot to report

Ipswich Club Airfix Competition
In September, the club holds their first Airfix Series One Competition. Entries are limited to kits from that series and must be 'out of the box' with no after-market add-ons.
I thought that I would try this and see if I could still make a halfway decent 1/72nd aircraft. I got hold of an Airfix Fleet Air Arm Corsair. I like the story that we taught the Yanks how to land these things on carriers - and with aircraft with 18" clipped off their wings, as well. The wing clipping was because our carriers were smaller than the US ones (do some things never change!).
I found two problems with the kit - apart from having raised panel lines and rivets that you could shred a finger on. One was the emptiness of the cockpit with the second being the fact that the wings weren't clipped! This I found amazing, because Airfix mentions the clipping in the description of the kit. Oh well. I checked with the Chairman and Secretary to be told that 'scratchbult' would qualify - maybe if I blagged hard enough. So, I have filled out the cockpit a little with some plastic card and taken the required nine inches off each wing. here is a work-in-progress image. There is not a lot to be discerned in gloss sea blue, which is nearly black. Still it will look better once it has some decals. 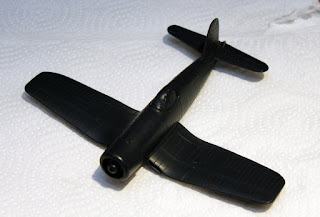 U-Boat Crewman
Continuing my mission with1/10th scale busts, here is the next one finished. There was not a lot to this one - head, cap, body and binoculars. Still it was great fun to do and I think I am getting faces to work better. I still couldn't tell you how I do them - I just keep going until they look right. This figure was mostly airbrushed to get the shades right. The face was, as usual, dry brushed to get the final effect. 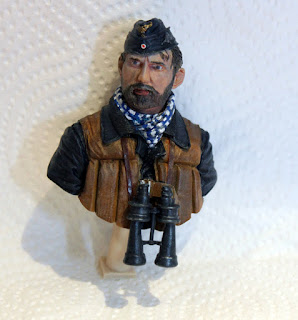 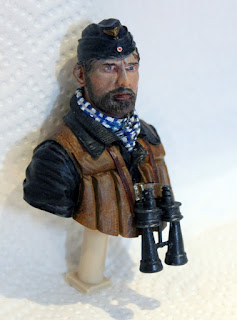 Revell Shelby Cobra
I am also getting on rather well with the 1/24th AC/Shelby Cobra. I am doing it as a late 1960's racer. I have some - cheating - 'pre-painted' seat belts' coming so they should tart it up well. 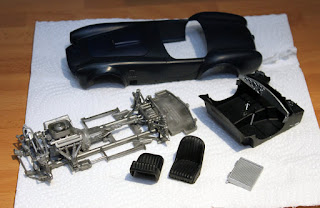 This one is painted in dark blue and everything metal is Alclad. I have yet to touch up the chassis as there are other colours required in there to give it some life.

Next Bust Project
This is the Young Miniatures 'The Black Devil' - Soviet Naval Infantryman from WWII. As you can see, there are a few more parts to this one. So far, all I have done is remove the moulding blocks and tidy up the flash. Unfortunately, whilst cleaning up the bandoleers, I knocked off one shell head and there were three others already missing so I have to think how to recreate these. Fun - what! 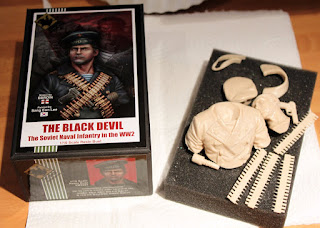 That's all for now. More in-progress as I go. Don't forget, by clicking on any image you can see a larger version. The busts don't react well to being seen many times larger than life so please make allowances.

As ever, comments are welcome, if not mandatory!
Posted by Long Haired David at 12:44 PM 1 comment: