So far - so good - Tempest and Lightning coming on well.

Here is the Tempest - still going, you notice. I have sprayed the underneath with Xtracrylix Medium Sea Grey and have masked it all off. The first coat of Ocean Grey on the upper surfaces highlighted an issue with the port wing root so I have had to re-glue and re-fill the area. Here is the current state. 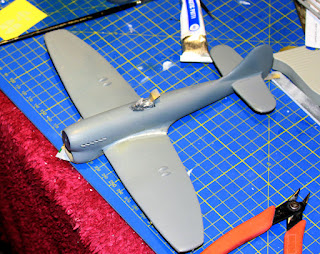 The Lightning is coming on quite well. Everything that's to be aboard is aboard - I have left off anything that might get broken. It is all prepared for its first coat of primer. This will be Vallejo Polyurethane Black as the bulk of the aircraft will be Aluminium natural metal. As you will have seen for the photo on the last post, only the spine and the tail are gloss white. I also need black wings as I will do the trick I learned last time - mask out the do not walk lines on the wings with very thin masking tape over the black - rather than trying to put black decals down and keep them straight. 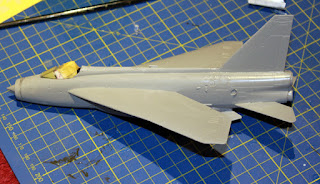 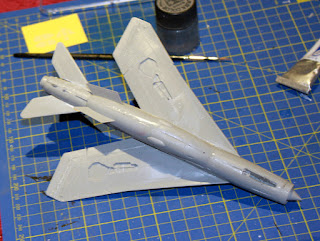 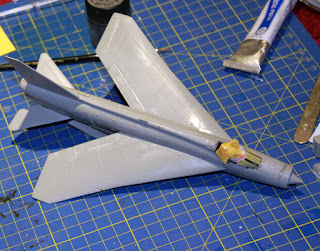 Posted by Long Haired David at 4:40 AM No comments:

Two topics on the go - a bit of rationalising

As I am now running in and out of the shed to do my airbrushng - SWMBO has moved me out to keep the kitchen tidy! - I am finding that I need something to do between bouts of airbrushing.

I have also been considering formalising my modelling rather than the 'jump around' that it has been over recent years. With no more public outlet - not that I needed that to do the wide variety of topics covered over the last few years, I have decided to go for a theme and stick to it - I then failed at the first hurdle.

Leaving out the 1/48th Eduard Tempest - which was a 'labour of love' - HA! - I have always meant to concentrate on FleetAir Arm models, even to the extent of buying a rather expensive and hard to get book which details all of the FAA aircraft since 1945. So, this is my plan - work on a series of FAA aircraft in 1/72nd. So what do I do first - well I had this 1/72nd Trumpeter EE Lightning F-6 left on the shelf from a failed sale! I have already made the F-2A from this kit so I fancied a bare metal version.  As I say, I was going to stick to a theme.

Here is the aircraft I am modelling: XR753

Still here we are. I have been doing it in between paint trips for the Tempest. I am NOT going to worry about inaccuracies in any kit that I build so every one is to be out of the box. Here are the first pics of the Lightning. Remember that this is 1/72nd and also that it is me - grin. 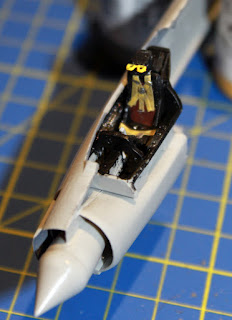 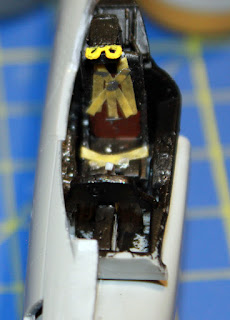 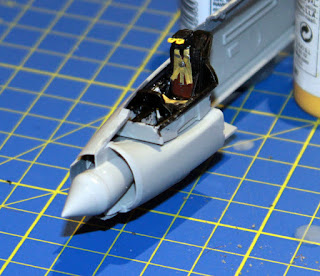 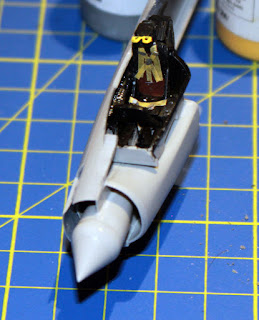 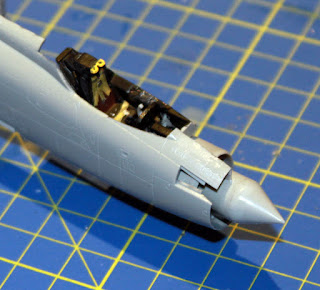 Future Plans
I am going to go for the theme as stated. The first four models are on their way and will be started once the F-6 is done (oh, and the Tempest - if I don't throw it at the wall first).

I will wait for the new Dragon Sea Vixen rather than tackle a short run MPM or Xtrakit as I know that they will bring out the same feelings as this Eduard Tempest.

I have been shown the Alley Cat Fairey Gannet AEW3 - I know that it is resin with white metal, but one of my friends from the Air Scouts back in the 60s flew (and crashed) one so I may have a go.
Posted by Long Haired David at 12:55 PM No comments:

Such a nice cockpit but...

I did build the cockpit but when it came to fitting it, it was way too wide so I had to almost destroy it to get the basic bits in. In fact, all you can see is the seat and a bit of the floor, so that is what I fitted.

Next stop - fit the wings - not so easy or fast.

Here is what you have to contend with when you fit the undercarriage bays onto the lower wing. 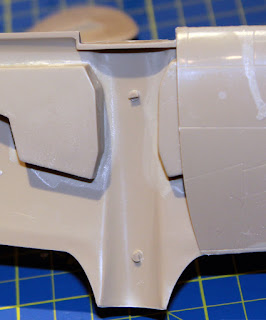 This narrow gap is what is left between the two bays. If you skip back to the cockpit - or see below: 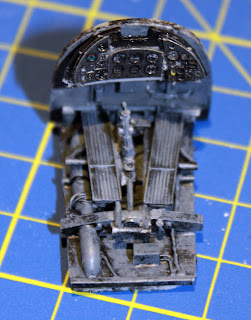 Now tell me - how is that going to fit between the two bays - simple answer, it isn't!

This is what I had to do to make it fit - not pretty but it works - and you can't see it once the fuelage is glued up! 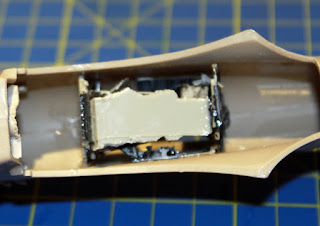 Now it all goes together. More pics tomorrow unless I throw it against the wall - grin.
Posted by Long Haired David at 12:14 PM No comments:

Why oh why do I get involved in etched brass and resin?

I have spent the whole evening putting together the cockpit. Having checked how much you can see when the fuselage is put togeter, I am not sure quite how much you will see.

I have more super glue on my fingers than on the bits that needed sticking.

Question - why is it that my fingers stock to gether instantaneously but what I want to stick takes 5 attempts?

Anyway, this is what it looks like at the moment: 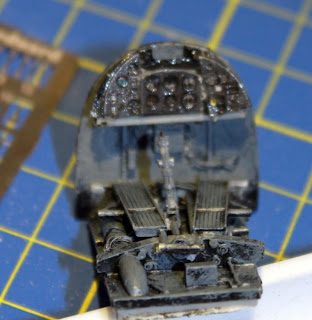 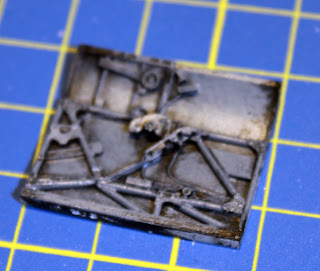 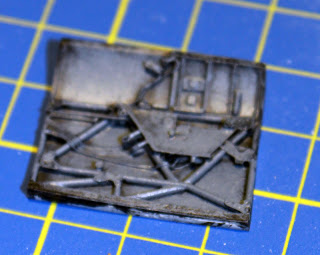 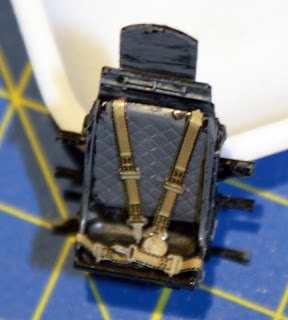 Posted by Long Haired David at 6:46 AM No comments:

I have decided to get back into modelling after a few months of concentrating on my other three main hobbies, playing the concertina, jigsaw puzzles and sewing tapestries (!).

Mind you I am not sure that I have done this right knowing the problems I have had in the past.

I am going for the new Eduard limited edition of the Hawker Tempest Mk V - mainly because there are marking for both Rollie Beaumont and Pierre Clostermann. Beaumont was one of my childhood heroes. 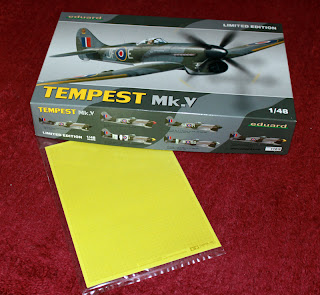 However, the kit is a typical Eduard special - a resin cockpit, lots of etched, a mask and no alignment pins. As I normally avoid resin and etched like the plague, this is going to be fun. I didn't do a bad job on the 1/48th Airacobra from Eduard so I am hoping that this one will go as well. The camo is hard edges so that is a bonus.

With regard to the hard edged camo, you can see in the picture a new idea from Tamiya. This is Tamiya masking tape on a sheet (with a printed grid). I can print out the camo design by rescaling the instructions in Photoshop and cutting the sheet out. It will be interesting.

There was a second project - we got stuck with an Eastern Express 1/72nd Mig 21 kit which looked like an interesting build until I opened it. The instructions are minimal, the painting instructions are non-existent and the decal sheet codes don't even correspond to the aircraft shown in the instructions or on the box! We shall see - grin
Posted by Long Haired David at 6:44 AM No comments: