Ok, so things were going really well and then - well you have heard the story before. As usual, I screwed up on a few simple things. One of the laws of model making is that once things start going wrong they don't stop until the whole thing is wrong.

I fitted all of the lights.

Things were going grand until I came back to check and found that one of the rear brake lights had fallen out - somewhere - and was not to be found. As these were small blobs of red, I thought that I could replace them with blobs of super glue suitably painted.

As you can see, the left hand one is fine but the right hand one - well, the only way I can describe it is that I hamfistedly touched it - without realising - and then held the body to turn it. Needless to say, I had some superglue on my finger and the result was to say goodbye to a portion of the decal on the left hand door! 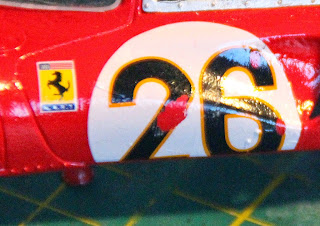 That left me a bit miffed. However, I was really only cruising by this time as I had already written the body off with my stupid attempts at adding the front and rear screens. I normally use Gator's Grip for fitting screens as I can clean it up with water. I am now trying out the Thin Gator's Grip which seems to dry quicker than the standard formulation. The net result was that I got some on both screens.  Again, normally, I can wipe this off but it didn't work on this occasion. In trying to clean both of the screens, I managed to crack the front windscreen! The rear screen wasn't too bad so I thought I might try to buff out the problem with some toothpaste. Again, I have used this successfully before. Not this time. You can see the results of both efforts in the pictures below. 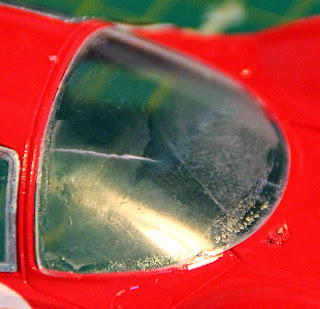 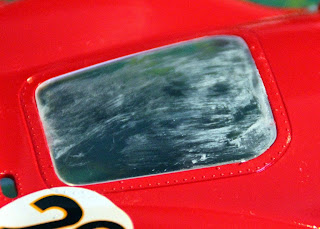 I am left with a very nice chassis. 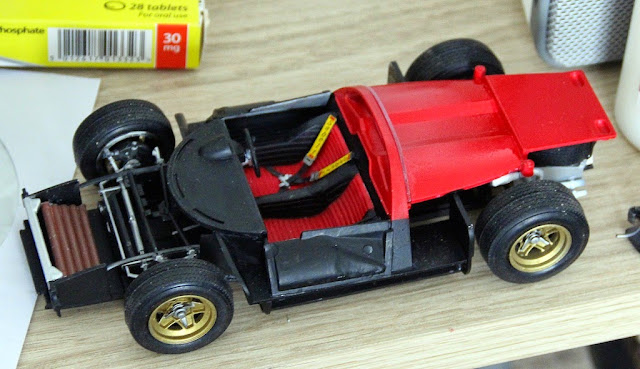 and a nice body - apart from the two screens and the decal damage.

I decided to finish off the body - you shouldn't fit the lower skirts until the body is on the chassis but this is never going to happen so I carried on. I love the final effect of using the two pack varnish. That works wonderfully and the car is gleaming. My next job is to order up another kit and make a new body. I wouldn't normally bother but I don't want a gap in my model procession. The kit is unobtainable in the UK so I have to get one from Japan but Amazon have them at £29 so that isn't too bad a deal. Watch this space!
Posted by Long Haired David at 4:21 AM