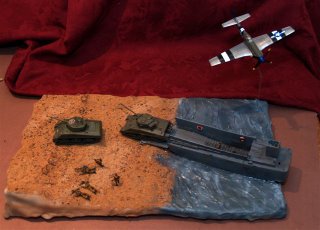 I got it finished sometime Monday afternoon. To see the final diorama go to
My Diorama Page
I took it to Colchester and came 2nd to last with it. The first comment I got was "Those D-Day stripes are wrong!" A few more batters like that and I decided I had enjoyed making it so they could...

What made me laugh was the two major errors in the setting.
1. The Firefly could not have come from the LCM as there wasn't enough room for it to get between the life belts.
2. (Biggest sin of all) - the barbed wire was 1/35th scale - so the laugh was on them.

What horrified me was the cost. I think the whole thing cost around £65 to make. I did, however, use some new materials and learn some new techniques. The polymorph and Alclad have both added to my knowledge and skills.

If you want to see it before it appears at Ipswich IPMS next month, it is in the shop now.

Back to Normal - the Xmas kit lucky dip
Every one brings a kit wrapped and every one gets a number. Numbers are drawn and you choose a box (not your own of course). With my good luck still running, I was the last number out of the hat from 13 and saw all the interesting boxes go. What was left looked like last years 'bad' joke by Jan - an Airfix bi-plane - so I could see an 'interesting' Christmas. As it was the last I had to take it and - blessing - it turned out to be an Metal Modeles 54mm Napoleonic Polish Lancer of the Guard - bought from my shop, no less! As one of my Xmas presents is the new Andrea FAQ for Figures, I am looking forward to doing something I haven't tried for 30 years. That's how long since I made a 54mmNapoleonic figure. I will keep you informed.

Ipswich Quiz Night
I went along thinking it was going to be totally prototype oriented, and although I did represent the London Air Scouts at the All England Aircraft Recognition Competition - circa 1961/2, I felt that I would do badly. As it was, it was more general knowledge so I held my end up in our team of three - Kev Baxter, Bob James and me. When it came to the photo round, courtesy of Mike Grzebien - well done Mike - I was useless but Kev was brilliant on aircraft and Bob had the armour sussed. We won, no real thanks to me so we got prizes - I guessed mine as a box of Maltesers - and was right - so there! A good night all round. I did win on the raffle but a freeDragon Panzer II didn't excite, so I put it back and Dom promptly won it - out of two winning tickets. Kev announced that the January club dinner was to take place on 19th January and the club will pay for the evening! Its Valerie's birthday (my wife) on that day so no free dinner for me :-(

You know, some weeks, I am glad to be me!

Oh, and if I don't see you, have a good Christmas and a great modeling new year.
Posted by Long Haired David at 1:01 PM No comments:

Nearly there - one day to go

Well there is one day to go and I am close. As you can see, all of the components are finished.

I have to fit the figures in place, put down the barbed wire and the tank traps. Lastly, I need some rope for the drop front. We shall see what everyone thinks - I know what I think but then I only had 3 1/2 weeks!

Posted by Long Haired David at 12:46 PM No comments: 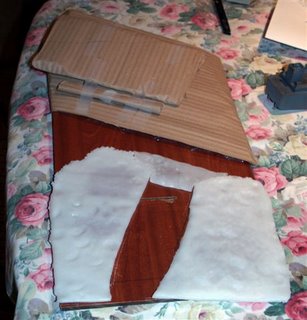 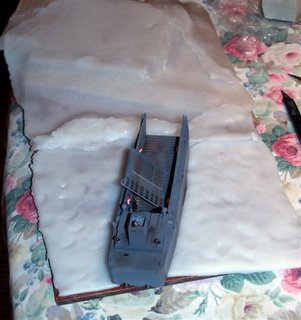 The Polymorph arrived yesterday - at the same time as Aaron turned up with his bag :-) As I didn't know how far it would go, that was not a bad thing. Then I forgot to bring it home! Thus, I worked on the rest of the items - I put the life belts in the LCM and used super-glue and MIG earth to simulate puddles in the boat. There is a duffle coated sailor in the wheel house  (courtesy of Hecker & Goros). I also put some decals on the Sherman (did I mention the Sherman? No? Well that's another Amourfast kit).

I did get a length of transparent sprue - thanks to George, Kev and Chris.

Now tonight, I cut up one side of Lifecolor paint rack - for some reason they sent us 5 sides when we needed 3! The Polymorph melts quite well and then I rolled it out. I did it in small sections - the first two had to fit around the LCM to look as though it was in the water. I then used corrugated cardboard to make the beach. Once everything was in place in small bits, I used a hair dryer to melt it all into one. See the pictures.

We move on. Tomorrow I will cut it to final shape and put some Vallejo water on it - before that I will put some Games Workshop sand down. Then we have to get some tank obstacles and barbed wire - then we have to get it all together - all before Monday evening - oh well! 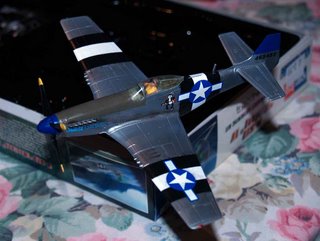 I have spent a week realising why I prefer armour nowadays. I took a couple of evenings to put the Firefly together. Even the LCM only took about 4 days. However, this Hobby Boss P-51 has taken about 8 days one way and another.

Its the too-ing and fro-ing that does it. Make a bit - paint a bit - make a bit and so on. I did try Aclad for the first time and was pleasantly surprised with how easy that was. I needed a pilot so cut up an Italeri Bitish Infantry figure - even made himwave as he flies over. The day after I did this, we took delivery in the shop of a set of Heller (old Airfix) RAF personnel! Never mind. Here is a snap of the completed item.

Now a cry for help. I need a piece of transparent sprue that is at least 6" long. I don't mind if it has joins etc., just so long as I can trim it to that length. If anyone has one I would be grateful if I could get hold of it by next Saturday at the latest.

2nd Cry for help - Aaron - my new supply of Polymorph hasn't arived. If you have more then could you lend me some?

I have now started the Sherman on the beach, hoping that I can get on with the beach itselfby Wednesday at the latest - we shall see!
Posted by Long Haired David at 12:12 PM No comments: