Getting back to normal P-39Q and Beneito 54mm

Well, we have been through lockdown and, as a family, we have been shielding for most of the time, which means not going out or seeing anyone else. I have made quite a few models in that time but got out of the habit of posting here, yet again. I am making a new start, now that the Covid restrictions are slowly being removed. That said, I had a £50 Hannants voucher for my birthday back in March so I took advantage of the restrictions last Saturday. Hannants are still closed to visits but do provide a click and collect and there was me with a £50 voucher and a new car! Saturday was the day that I drove to Lowestoft and back. It always used to annoy me, when I had SBX Model Shop, that people could drive the 45 miles to Hannants and back on a Saturday rather than coming in to me, but now that I am retired I am happy to do the same thing. Mind you the nearest other model shop is in Colchester and they carry very little that I would want.

I am not one to own a stash but currently I have a little one building - Tamiya 1/48th P38, Hobby Boss 1/48 RN Avenger and now  an Airfix 1/72 Beaufort and 1/48th RAF Sabre. I will pass me thoughts on the P-38 later as I am reluctant to start that one. I have had it for nearly 2 years and it remains in the box.

Right, thoughts over, what have I been doing this month. I am having a restart on some 54mm figurines, I haven't done a 54mm since way back in 1973 so I was worried that my skills(??) on 1/10th busts might not translate. I picked up a Beneito Miniatures British soldier from the Mahdist War in the Sudan - specifically from the Battle of Ginnis in 1886. I liked it because of the informal pose. 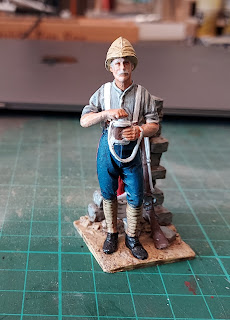 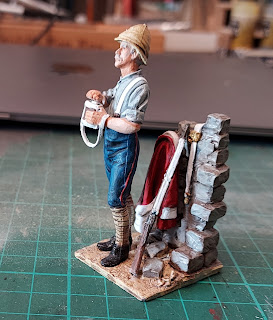 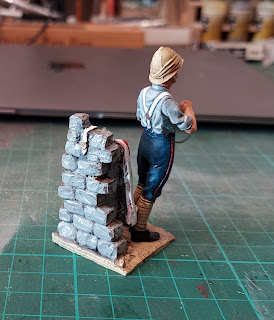 I think that I made as good a job as I am capable of with this figure. So much so, that I have bought two more to tackle, but some about that later.
OK, on with the current scale model. Valerie bought me an Eduard 1/48th P-38Q for my birthday. I have built one of these before, as a night fighter. This one arrived with an Eduard set of 3D printer decals for the control panel. These were very realistic and came in three layers. Firstly, I found them difficult to glue as none of my usual (non-super glue) glues worked. Secondly, when putting the fuselage halves together, to get the two parts to merge correctly, I had to give it a bit of effort. I heard a "crack" and the 3D panel broke into three pieces. It seems that it was a little bit too wide for the closed up fuselage.
I put the model together carefully but it needed quite a bit of filler in various places. It looks very nice to my eyes. I have finished it as follows:
"39Q-5 21-9896, flown by Lt. William W. Gambill, 363rd FS, 3257th FG, 8th AF, Oroville CA, USA, autumn 1943" - Hamilton Base CA, used for pilot training and factory-fresh."
Here it is in its partial finished state. I have used these images to highlight the issues that I had! 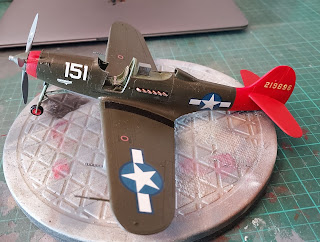 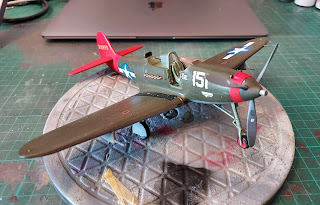 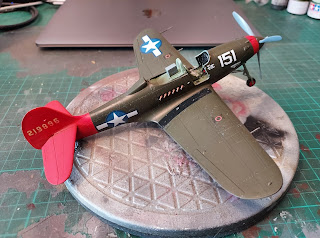 Overall, I have enjoyed the build, except for the 3D mess. Also, there was a sheet of etched but I find that I can't manage all the tiny pieces that Eduard show you to use so that packet was a waste of money.
Lastly, I have had to buy a new airbrush because my Iwata HP-CH seems to have given up the ghost. I have had it for about 8 years. It has been difficult to use over the last few months and I have had to fight it to get any results. I even bought an UltraSonic cleaner bath but even that didn't solve the problem. I finally gave up and bought a new airbrush. The new one works absolutely brilliantly and has brought back the fun of painting a model. How much was it? Well, it is a generic make purchased off Amazon for the grand sum of £15.00 - yes £15.00. Super! 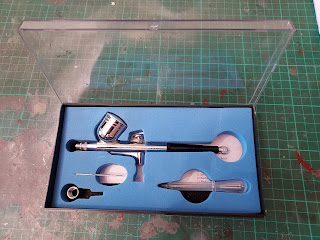 OK, that's all for now. I will finish off the P-39Q and describe it in its final state; I will talk about the new set of magnifying spectacles which I bought off Facebook and I will lead you into my next project.

Posted by Long Haired David at 9:31 AM No comments: