I did get my brain right. I had a look at the other kits and decided to have a go at the Fujimi Ferrari 512S. What I didn't realise was that this was a very old kit. After starting work on it, I got to the point where I had to mount the engine and realised that I was never going to get it to work.

The model might follow the prototype perfectly but getting everything together and strong enough to hold the rear wheels in place was a task beyond me. This is as far as I got. 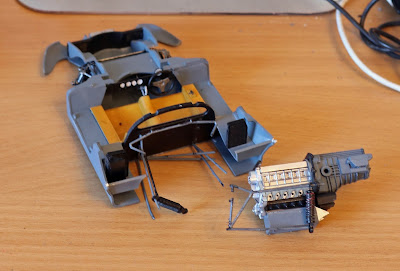 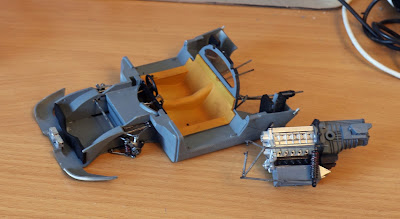 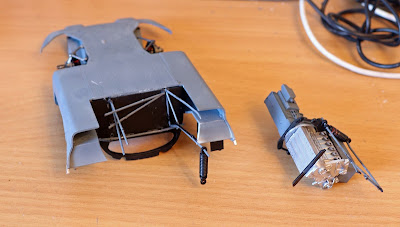 As you can see, the engine is supposed to hang off all of those thin structural arms. Well, I could see that being a bit of a stretch for me so I put the box where I could remember to take it down to the bin room. However, now that I have opened it up again, I think that I will just replace it on the shelf and have a second go some other time.

Ashamed of myself, I dragged the Corvette C7.R out one more time and had a third go at getting the black and yellow masked off. This time it worked to an halfway decent level. I decided that I would regard this as a "four feet" model. This is an expression that Aaron Spilling (an old SBX customer and creator of Paint4Models web site) used which meant "only look at this model from four feet away". Well, the Corvette isn't quite that bad but it isn't a good idea to get too close!

Any way, I finished the painting and started on the decals. There are nearly 100 of these and some are really tiny. I lost some of the little red arrows that indicate the door and panel opening catches. I scanned in one I had left, put it into Illustrator and placed it on a background of yellow as near as I could get to the car colour. Then I made a few copies and printed them out onto a sheet of white decal paper. After a coat of varnish,I placed them on the car. The idea of the yellow background was as follows. If you print yellow or red onto clear decal paper, the colour is very muted as the printer expects to get white paper behind it. However, if you print just the arrow onto white decal paper, you then have to trim the image. As the arrow is only 2mm long, this wouldn't work. By putting a yellow background, I could cut out the arrow and leave some of the background. Not ideal but better than no arrow, or at least that is what I thought. This is the result. 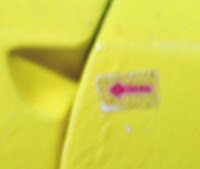 It looks terrible when seen at that magnification but it looks OK on the model from that four foot distance!

In this picture you can see some of the other arrows. Although the background does show, the arrow is still there which is better than not.

Anyway, here is the finished article.

It is a very dramatic model and I am pleased that I finished it.