As mentioned in the last entry, my next aircraft was to be the Airfix Hurricane. I only have one other aircraft in the "stash" and that is a very short run Sword Lockheed Seastar. I bought this when I was on a roll with US Navy trainers - having made a T-2 Buckeye and a T-45.

However, before buying the Hurricane, I had a look at the Sword kit and thought - no location pins, bits of resin, lots of photo-etch(PE). I can leave this one until later.

I must have had a brainstorm! I have had to give another couple of coats of yellow to the Corvette and then sand some bumpy bits down so I couldn't carry on with that. (So much for me finishing it today and getting on with the railroad tomorrow). As I was in kit building mode, I thought about the Hurricane but then said "Why not. The Seastar can't be any more difficult than resin Fairey Gannet, which I finished successfully some years ago". So, out came the Sword kit and off I went. 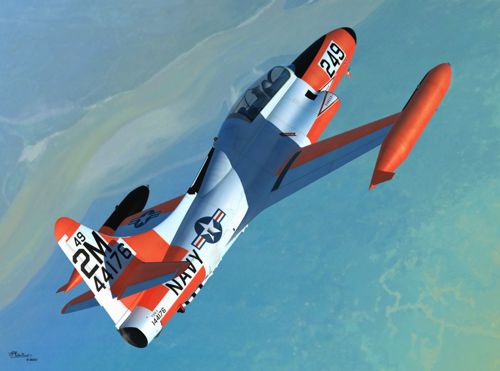 A nice looking plane and in white and international orange.

First things first and the cockpits have to be built. There is quite a bit of PE in the cockpit. Fortunately, I have an Etch-mate PE folding tool and some good Zap-A-Gap CA glue. So, in my new slow and careful modelling mood, I worked slowly through.  Then the carpet monster came into play. I made up the two control panels. Both are a sandwich of a plastic back, a PE black layer for the dial faces and a PE outer layer for the panel surrounds. I got as far as gluing on the black layer for both panels and was waiting for the CA to go off. After painting the tub of the cockpit and the resin bang seats, I couldn't find one of the panels. I even asked SWMBO to have a look for me but no luck.

I used the black panel layer as a pattern and cut a new styrene backing, and, one would have thought, I painted the face black to imitate the missing PE. No, I forgot that stage so having glued the panel on, I had to paint in the tiny dials with black paint. I went for dinner. Came back an hour later and, in making the front undercarriage bay, dropped a part and went looking for it. Not only did I find the dropped part but also the panel from previous. The carpet monster was having fun with me by hiding it earlier but letting me have it back, eventually. I had to cut the front PE of the new styrene backing and put it all back together. 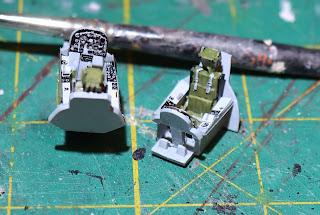 (you can click on any image for a slide show)

After that little episode, I began to look at moving on. The cockpits fit into the fuselage but, true to a short run kit, there is just a little bump to align everything. Added to this is that the front cockpit is glued to the front undercarriage bay which means, I am sure you can tell, lots of opportunities to fit it in the wrong place!

As it was nearly eight pm, I decided to write up the blog and leave the kit until I am fresh tomorrow morning.