A tale of two Beaufighters

The software for the model railroad is nearly ready but I am fed up with fighting it every day. Some time ago, I made an Airfix 1:72 Beaufighter and did it up in RAAF (Royal Australian Air Force) colours as a gesture to my e-mail friend (and ex-SBX customer), Mark, in sunny Sydney. 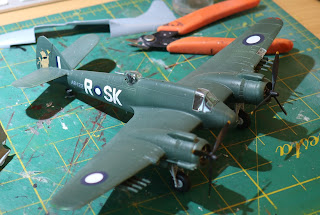 A few weeks ago, I bought the Mark 1 1:144th scale version that is in RAAF colours out of the box. 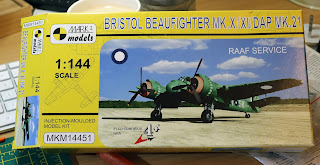 On asking what I want for Christmas, I suggested to my wife that she gets the Tamiya 1:48th version and then I would have the set! 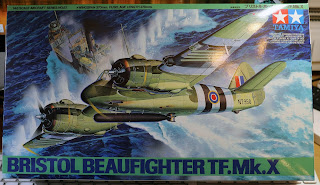 That duly arrived on Christmas Day so I promptly ordered some RAAF decals for it. I think that all three, in ascending order, all in foliage green, would like rather good.

Anyway, I have started the build and, because they are both going to be built the same, I will make the two of them together. Should be great fun. Here is the first step - putting the cockpits together. Not much difference in size, is there?

Along with this interest, I have been made aware of the Banff Strike Wing during the latter stages of WWII. This wing was created to attack Nazi shipping bringing iron ore down from Northern Sweden along the Norwegian coast. This, very necessary, traffic had to be stopped to put the pinch on Nazi weapons manufacture. The Strike Wing was comprised of Beaufighters and Mosquitos. They had the long haul across the North Sea to the Norwegian coast and then a frantic, dangerous, two minutes of action - guns, rockets and torpedoes - none of which could be used at any real height. 216 brave souls lost their lives carrying out this task (a similar rate to that of Bomber Command).

As a result of this, I have now purchased another 1:72 Beaufighter and a Mosquito Mk. VI along with the required decals to recreate my little tribute to those brave men. Additionally, I have bought "A Separate Little War: The Banff Coastal Command StrikeWing versus the Kriegsmairine and the Luftwaffe 1944-1945" by Andrew D. Bird so that I can immerse myself further into the history. Unfortunately,a separate book of photos is out of print. 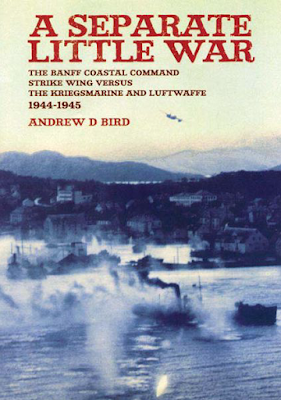 Posted by Long Haired David at 8:40 AM