Spitfire Mk VI finished and the Corvette on the way

I had a burst of enthusiasm yesterday and finally got the Italeri Spitfire Mk. VI finished. It is straight out of the box, except for one mishap, as usual. I put the decals on the underwings, painted the yellow  leading edges and then added the red patches over the gun ports (which were supplied as decals. In trying to get them to conform, I dosed them with Microsol. Unfortunately,  I touched one of the patches before it was dry and it came off on my finger. The only solution was to paint all four as mired paint wouldn't match the decals. I masked off the yellow stripes and did some of the painting. When removing the masking, the RAF roundel on one underwing came apart with the tape.

Fortunately, Hannants sell a decal sheet of the exact ones I needed. It was £3.05 with free delivery and came within 2 days. Well done Hannants. So, I repainted the underwing decal areas and replaced the decals. All that was left to do was to fix the undercarriage and propellor.

As usual, I had a small (ha!) problem with the propellor. It has a four bladed prop but the only boss that I could find the sprues was a three bladed one. Where the correct part had gone is a mystery. I sanded off the routing slots for the three bales and managed to fit four around it. You wouldn't know.

Last two jobs were to give the model a coat of flat varnish and add the canopy. I decided to have the canopy closed. 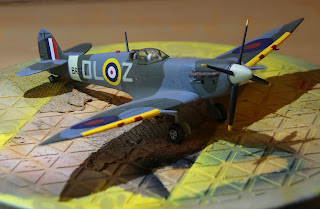 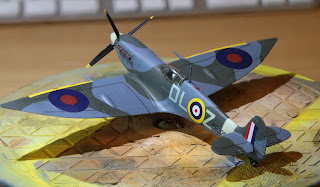 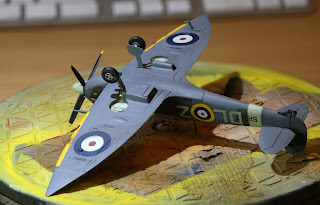 Now that this is finished, I intend to complete the Revell Corvette C7.R. Then, it is back to the railroad for a couple of weeks. I have already purchased the next aircraft kit - an Airfix Mk. I Hawker Hurricane from the Battle of Britain. 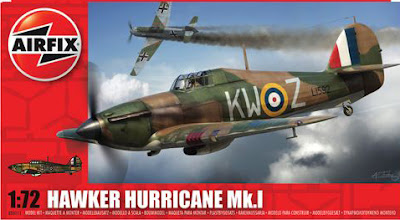 I need to get the Corvette finished. It is quite an easy kit building I have all of the chassis completed. 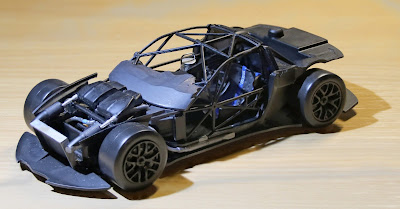 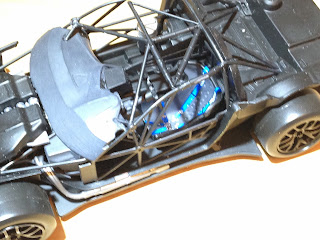 I have also sprayed the bodywork with the Zero Paints Corvette yellow.  Even though the plastic was yellow, I did give everything a coat of white primer as I find that yellow needs a white background.

(I have just noticed, from the photo, that I have missed painting the rear view mirrors yellow!)

I should get this finished tomorrow, and apply the decals (lots of them) over the next few days.

Posted by Long Haired David at 7:48 AM