The new nozzle arrived. Once fitted, I gently tried the airbrush to find that it worked perfectly. So, thanks to Ken Medwell of The Airbrush Company. They provided their usual first class service.

Where am I left in all of this. Well, I have a nice little Neo airbrush which can be used without a paint cup. 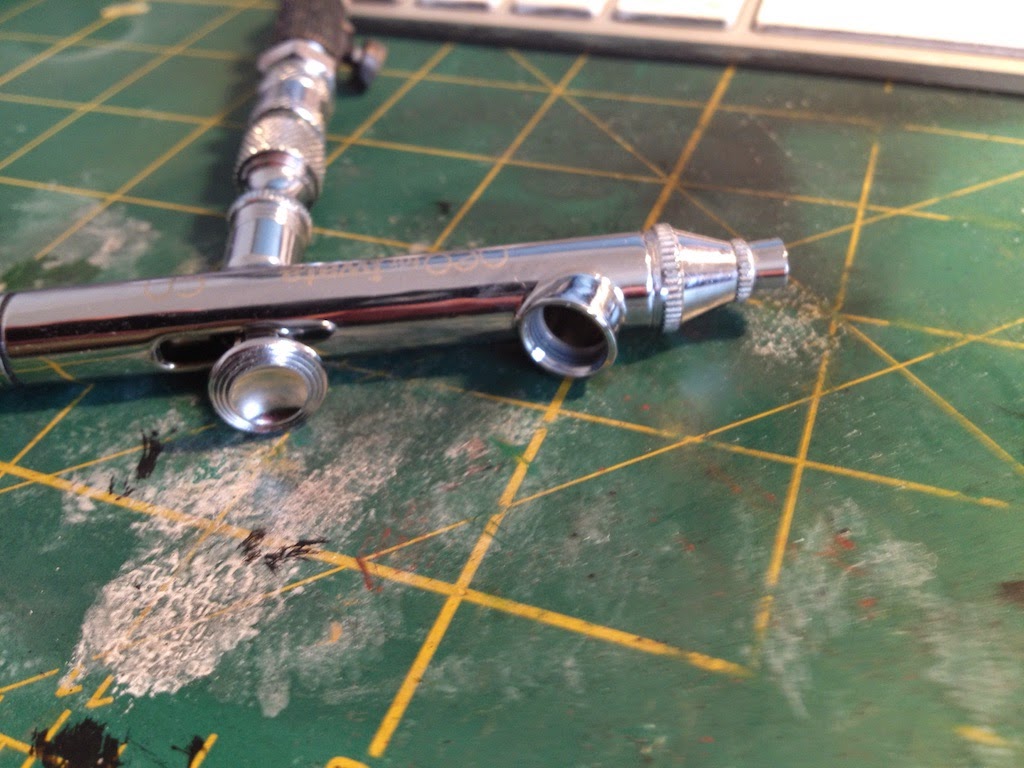 Without a cup attached, it will hold just under 1ml (1/32nd oz.) of paint. I have found that this is sufficient when doing small amount of touch up. It has an added bonus in that there is no cup to clean out. A quick blast through to empty the brush of all paint/varnish and then a fill with airbrush cleaner followed by another blast though and everything is tickety boo! I find that I am turning to it quite often. In fact, it has made me think about the TR0 and why it is a fag to clean.

I used to have a Hi-line HP-CH airbrush which I sold off when I got the TR0. However, I am rethinking that decision now that I have re-acquainted myself with a top cup. The TR0 is difficult to clean because it has a side cup. This gives it a convoluted paint path. The cup has to be washed out each time to keep the small connecting tube clear of any residue. Then, the paint path does a 90 degree turn into the airbrush which, again, is awkward to clean thoroughly. The Hi-line is like the Neo - a straight through paint path that is easier to clean. However, the Neo cannot come close to the TR0 for detail work. The trigger gives a lot more control than the button on the Neo.

I am thinking about what to do. The Hi-line is £225 whilst the TR0 is £205 so selling the TR0 on E-Bay wouldn't give me enough to get back in with a Hi-line. I don't think that SWMBO (she who must be obeyed) would agree to me spending around one hundred pounds just to resolve my little airbrush dilemma. Oh well, I will just have to carry on!

Anyway, the whole thing is irrelevant as I am now managing very well with my combination of airbrushes so onwards and up as they say. I will use the Neo for the quick touch up jobs and area spraying whilst keeping the TR0 for the finer work such as aircraft camouflage, etc.
Posted by Long Haired David at 4:32 AM