Although I have been blaming the amount of medication, etc. that took up a lot of last year, there was another underlying reason why my modelling slowly drifted away. When I retired and closed SBX, I made sure that I topped up with anything that I thought I would need in the future - paints, glues, thinners, etc. plus a few kits. This last blast got me all these things at trade price so it was worth doing. One small issue I had at that time came from my arthritic hands. Using an airbrush for a long time was quite painful. Hence, one of the very last things I bought as SBX was a TR0 Iwata trigger airbrush.

I got on very well with this until the middle of last year - 2014. It seemed that it would only rarely let any paint through and became a nightmare to use. As this coincided with my other issues, I didn't really think about it. However, whenever I thought of making a model, I saw an image of fighting this airbrush so put everything on hold. I am making a lot of this as it was actually secondary to my health problems but it didn't help. Recently, as you know, I got back into the swing of things and am busy putting together the Copper Car Company racing Mini. This is going quite well. I got some colour matched painted from Hiro Boy - Zero One paints, which are lacquer based. On spraying the body, I again had huge issues with the airbrush. I had bought a full Iwata cleaning kit so I stripped the airbrush right down to its constituent parts and cleaned everything so that the whole thing glowed. I ordered a new needle as the one I had was slightly bent at the tip.

Being a bit of a belt and braces chap, I also ordered an Iwata Neo airbrush. Note that as the price of this is £55 - in comparison to the £215 of the TR0, this is a cheap unit. It has turned out not to be so. It comes with two sizes of cup. I tried it with the small cup. I ran the Zero One green through it and it sprayed brilliantly. It also cleaned up without any effort at all. I then found that I had missed spraying the four wheel arch extensions. As I only needed a tiny amount of paint to do this, I didn't even fit the paint cup but put the paint directly into the airbrush. Firstly, it sprayed then very nicely and, secondly, it took no effort to clean it out completely - not even a cup to clean!

I exchanged e-mails with Ken Medwell, of the Airbrush Co., who suggested that I might have a damaged tip on the TR0. Having bought a new needle, I felt that if I bought a new tip then I would have replaced everything so it should work. I hadn't accounted for the cost of a 0.2mm tip - £32.60. So, now, I have spent £32.60 on the tip and £10.99 on a new needle. This is almost the cost of the Neo! The tip should arrive today. If this doesn't work, I am going to have to send it back for a service.  Over the years at SBX, I because something of an Iwata guru so I am annoyed that I can't solve this problem. Still, the little Neo is giving me great service for now.

On to my second thread. I have sprayed all of the Mini that needs to be in British Racing Green but there is a big problem. The paint has gone on fine everywhere except on the body. The pain there has a gritty finish which will be useless as a polished car. 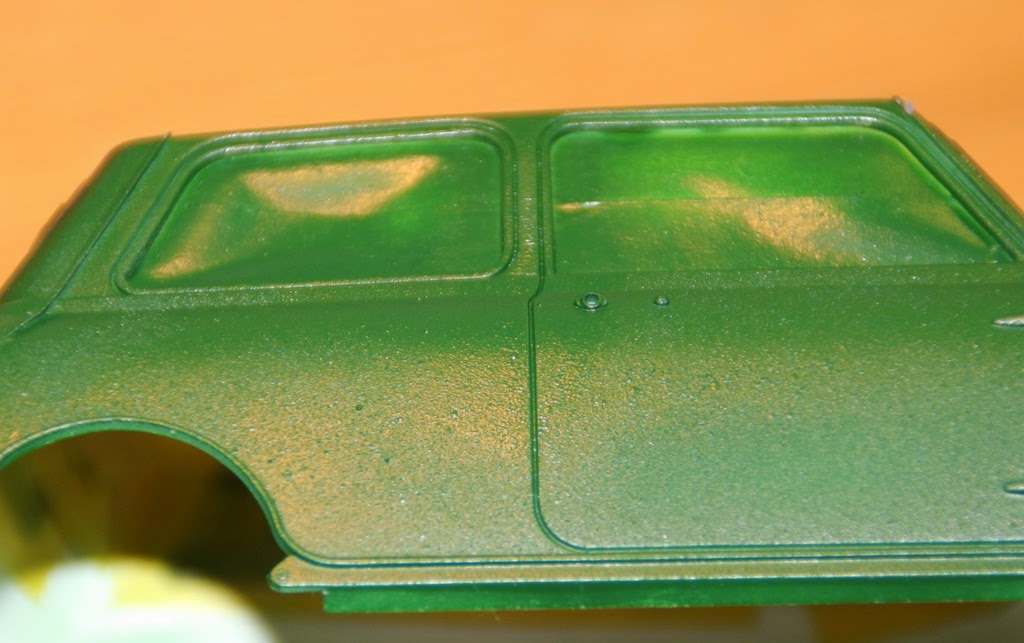 I am currently dousing it in oven cleaner in the hope that I can take it back to bare plastic and start again! The inside is coming on OK. It is a tiny car, so blowing up the image doesn't do any favours but this is where I am with it. 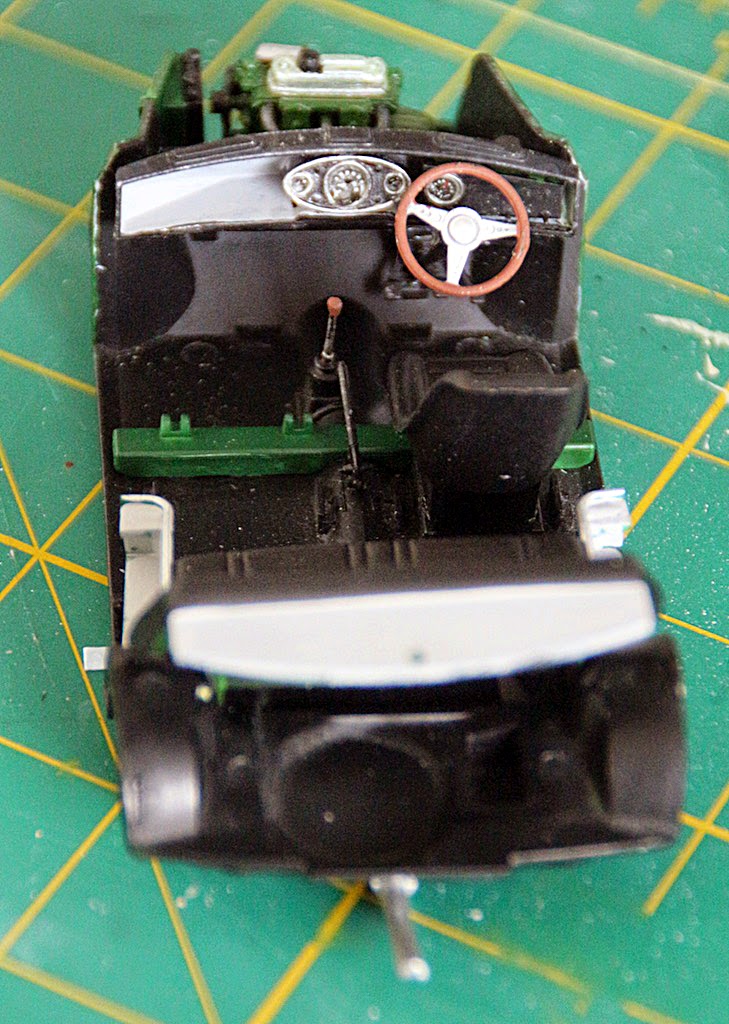 More news later.
Posted by Long Haired David at 2:35 AM

Sorry to hear of your issues. I know everyone raves about the Iwota AB's and as yet i have not tried one. I bought a Paasche VL many years ago and have not had an issue with it and i have to say i have looked after it and it has served me well. Good luck getting this rectified.

I have a huge respect for the quality and engineering in any Iwata. The nozzle on a 0.2mm airbrush is extremely delicate. I obviously haven't treated it as such.