So what do I have to do?

The idea that I would get on well with the P-51D has proved to be an illusion. There always seems to be something with aircraft but I am beginning to think that it is self imposed. The block I have at the moment is this. The nose of the plane has a red and yellow chequerboard painted and the the spinner has a red and yellow pattern. the chequerboard is on the decal but not the spinner. Now that isn't hard to resolve because it is a simple 50-50 split on the spinner. However, matching the red/yellow of the decal with paint is proving to be difficult. So, the model goes on the back burner along with the Catalina. I will get back to it - promise!

In the meantime, I have returned to my series of 1/10th Native American busts. This one is of a Blackfoot Raven Bearer. It was believed by the Blackfoot tribe that the Raven had 'magic' powers. The Raven Bearer wore a stuffed Raven skin on the back of his head. The soul of the raven thus worn was reputed to give the wearer advanced warning of the presence of an enemy.

The figure is one of the Young Miniatures series and like all the others I have done, is extremely well moulded out of resin. It is shown here from 3 days ago when it was about 50% complete. I am expecting to finish the model tonight or at least tomorrow so final pictures will appear then. Just so you know, i am experimenting a bit with the skin. As opposed to oils, acrylics do not have a smooth finish when dry brushed, which is how you need to finish a face, for instance. I have given all of the flesh a few coats of Johnson's Klear (well actually the new and supposedly formula changed Pleadge multi-surface polish). This should have filled in any small surface imperfections due to it's self levelling feature. Once given a coat of flat varnish, I am hoping that I will get a good texture to the skin. 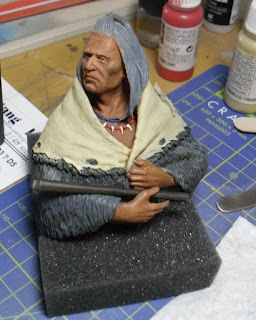 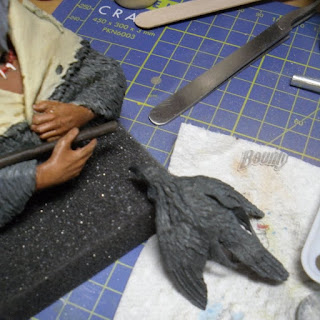