What a mess! A sad episode with a Tamiya Mini-Cooper but success with a Tyrell P34

Rather than get a new kit out after making the BMW CSi, I thought that I might resurrect a model that I was working on last year and put away. This is my Tamiya racing Mini-Cooper, which I am doing in Cooper Car Company colours as I saw them racing at Crystal Palace.

I put this away because it was one of the first times that I had used Zero paints (British Racing Green - BRG) and I made a complete mess so that it ended up with a very bubbly finish. I got it out and had a severe go at sanding down the paint and then polishing the plastic before priming the body again and giving it a new coat of BRG. That went on well so I got back to work on the chassis. After some serious conversations on BritModeller about seat belts, I realised that the kit racing seat was from a later era. I managed to get it off and replace it with a standard seat. I then had an investigation into seat belts and finally decided that a set of grey belt that were anchored to the rear cross member would be the best and accurate option. I happen to have bought some seat belt material from Hiroboy so I was able to make a good representation. Then, disaster struck - but let's have some photos first. 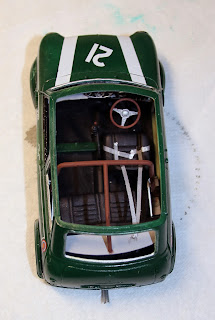 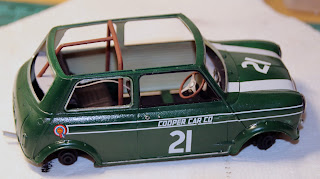 I was not sure about the stripe along the side and the BMC badge but the instructions showed them so on they went. The problem came with the other side of the car. The number 1 of the racing number folded over and then the whole decal broke up. I managed to get the 2 back together but the 1 was shot. I thought that I could resurrect this by masking the number to the right dimensions and spraying it white. Wrong! I had been a bit clever first, because I gave the side of the car a coat of Johnson's Kleer to protect the decals that were already there. Wrong! The masking went ok but I got some bleed under the mask - and the masking tape pulled some of the side stripe off.

I went looking for sources as this stripe was bothering me. It turns out that these weren't on the car that I was trying to model so I had wasted my time messing around with them. I tried sanding the decals off gently but that failed so I now have to strip the body again and get hold of some racing numbers to re-decal the car. I might get away with leaving the bonnet but if I can't then I will have to get hold of some white decal sheet to replace the stripes. Anyway, this is what that side looks like. 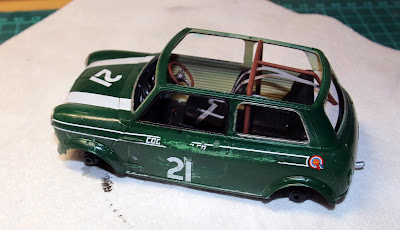 Guess what. It is back in its box again! I will finish it.

I grabbed another box that has a partially complete model in it. This time it is a Fujimi Tyrell P34 6-wheeled Formula One car. I have the chassis of this complete but the body needs building. Having looked at how great the chassis looks, I don't think that I will fit the body as then all of the complex suspension, etc. will be out of view so I will mount the chassis and the body side by side. 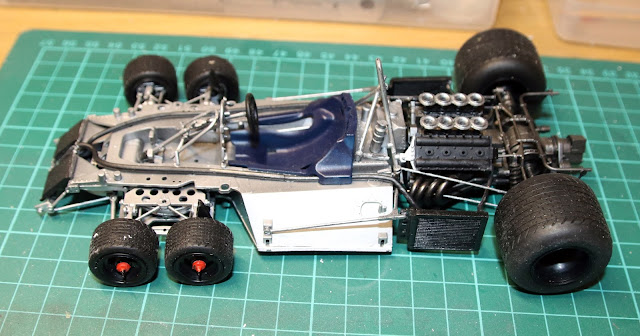 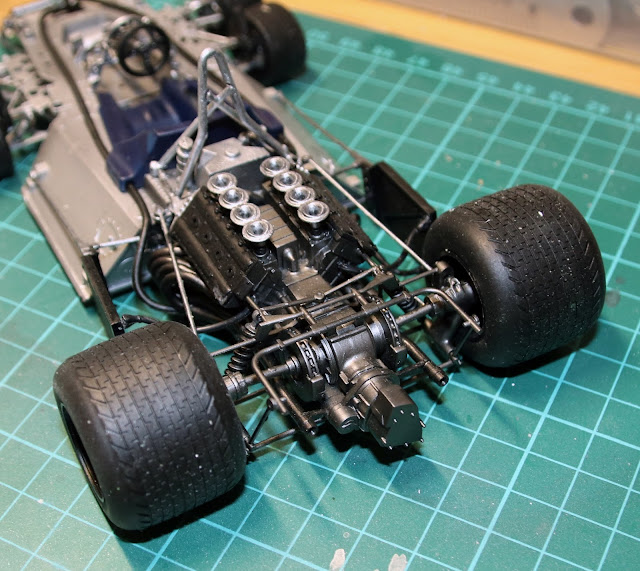 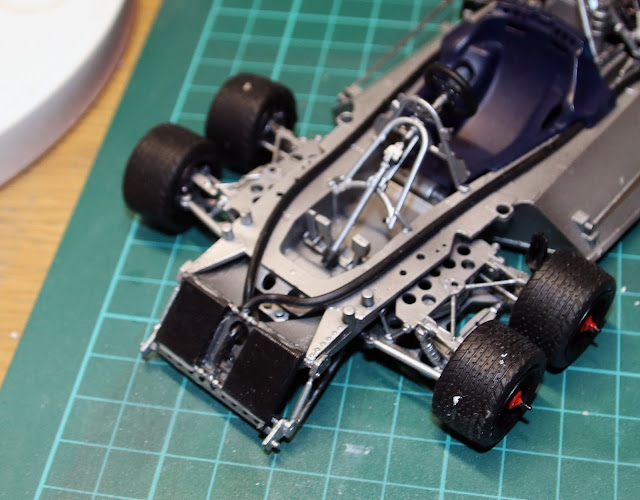 I have given the body its first coat of primer. 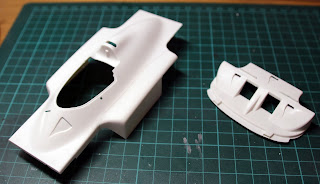