I thought that I would do an F1 car after a spate of Le Mans contenders. It also would make a change from Ferrari Red! I had this nice 1/20th kit in the stash so I thought that this would be easier than tackling one of the 1/12th scale monsters that I have lurking.

On opening the box, I was surprised as to how many parts there were to the kit. Not deterred, I pressed on and established all the parts that I thought would require a shot of Alclad. I normally use Alclad to coat anything in steel or aluminium. These parts require a coat of black paint first but then Alclad gives them a great finish. Having carried out this smelly operation, I started on the constructions. One thing that struck me was the delicacy of some of the parts. Four wheel steering, if you consider it, must be very delicate in real life, let alone in 1/20th scale.

I found that my fingers were way too big for some of the tasks so gentle handling of tweezers was the  order of the day. Unfortunately, I found that some of the parts required hadn't been sprayed with Alclad. Plus, it was hard going getting all the little parts into place without the glue harming the paint. Although I use Plastic Weld (contains Dichloromethane) which evaporates extremely quickly so normally doesn't harm the plastic surface, it was actually making a slight change to the tone of the Alclad. I decided that the best way forward was to just fix everything and then, very carefully, give the result an accurate shot of Vallejo of the right tone. This worked very well. My little Neo airbrush is just the job for shooting very small amounts of paint in tight spots. 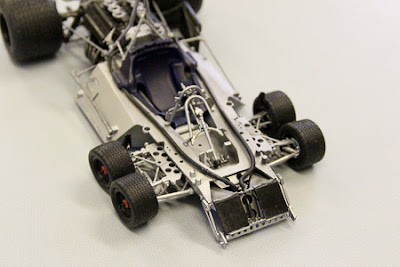 I managed to break one of the front suspension rods when fitting one of the front wheels. This required that the end of the rod be pushed onto a mount on the wheel. It was so thin that the item broke. Fortunately, there is enough support around it to keep it in place. I was, thus, able to glue it back together. As you can see from this image, the parts are beautifully moulded and are extremely fine.

Fitting the rear suspension was also a lot of fun! The lower locating rods both broke when fitting so I had to replace both with some 0.7mm brass rod. I have a nice digital vernier calliper that lets me check such measurements accurately.

I had great fun fitting the oil coolers. These are mounted by two pipes - that disappear into the bowels of the engine - and hook onto a single point on the side of the car. As there is no fixed point, the part floats around with, at any one time, one of the fixtures falling off. I estimate that it took me nearly 30 minutes to fit just one of these. Fitting the other one is my next task.

Looking great so far, what a classic car this one is and the details you are adding are working well.