And now for something completely different

I keep hovering between making one or other of the two Eduard special kits that I have in stock. One is their 1/48th P-38 for late war aircraft in Europe and the other is for Northern Europe F-16s. I keep looking at the first step - the cockpit - and putting both kits back.

One of the things I didn't stock upon when we closed all our trade accounts was some resin busts from Historex. These have been some of my most successful results (in spite of having to go head to head with Sonia Maes and Geoff Woods - both of whom win golds at major competitions). I have always been very pleased with my B-17 waist gunner and my Afrika Korps Tank Commander. I have recently been given a little bit of cash to spend as I like and, under pressure from my wife, have spent it on the following (and check out the links):

I have also bought a box of 6 shades of red by Andrea as I now have some British Scarlet to paint. Just imagine, me buying paint!

In the meantime, I thought that i would get back into the swing of painting figures and retrieved a box out of my stash. 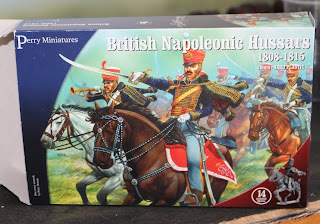 Now, these are 28mm plastic figures. You might ask "what do I know about such things" but I cut my teeth on 30mm Hinchcliffe Napoleonics back in the early 1970s so, if I dig deep, I should be able to manage. I am only trying four of them to see how it goes. I have put the four together, at least partially, and have undercoated them with some Vallejo grey polyurethane primer. Here is where I am at the moment. 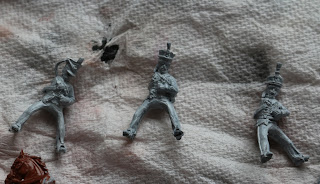 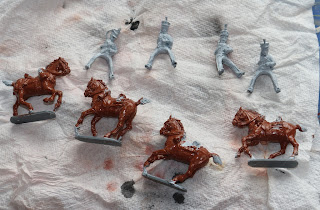 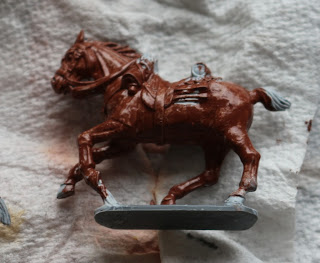 More pictures later. As a comment on the box, the contents are nicely moulded with very little flash at all. You get lots of heads, arms, swords, bugles etc. so that you can make a representative company of Hussars. Inside the box is a full colour page of every Hussar regiment during the period. However, they only show you the left hand side of every one - no right hand sides on show at all. Plus there is no real coverage of the horse furniture, so it is back to the two Gs - Google and Guesswork!