A mix of projects under way

I have quite a few things on the go at the moment so i thought I would give you a run down on the easy ones.

Firstly, I am a great fan of Camberwick Green - Trumpton - Chigley and have a large collection of the Robert Harrap series of figures. Recently, I have been increasing my collection of "the soldier boys that live in Pippen Fort". I have Captain Snort, Sergeant Major Grout, Private Meek and A.N. Other plus the bugler. What I don't have is Pippen Fort to stand them in front.  I bought a packet of white DAS - this is an air dried  clay - and am in the process of making the front of the fort. 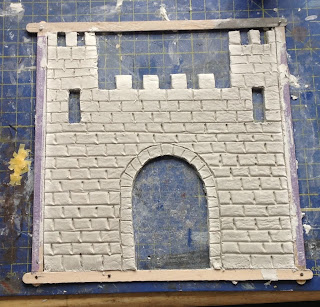 I laid out some Starbucks stirrers to double depth. These gave me a frame to work to but also gave me some supports for rolling out the clay to a consistent 3mm/ 1/8" depth with Valerie's rolling pin! Once dry, I will lift it and cut a sheet of plastic card to go behind for support. I then have to make both sides (but only 1/4 depth). The fort stands 6" high so this will look great behind the soldier boys.

Project 2 - Chance Vought Corsair - Revell 1/144th scale
Having enjoyed making the 1/144th Ju-52 recently, I noticed a little kit from Revell when I was in the Cheap Shop - Tiptree on Saturday. As it was only £1.99 I thought - "Why not". I expect to have this finished before I go to Clacton to the model club on Thursday. 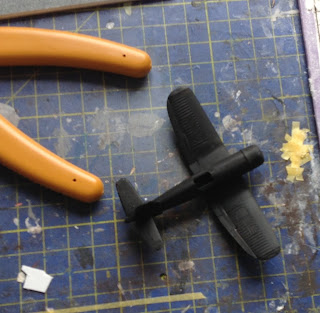 As you can tell from the handles of the cutting shears, this is not a large kit! It needs painting up in Gloss Sea Blue and then some decals. A quick job.

Project 3 - Sovereign 2000 Crimean War Officer
All I can show you is the body as the head is in the middle of a large paint job. This is pretty much finished. 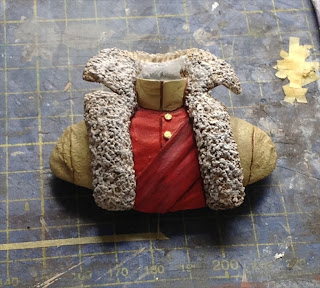 That's all for now. The Stagecoach is getting on well but I am trying to finish these projects before i get back on to it.

Posted by Long Haired David at 8:55 AM