This folding wing idea is going to work!

I have played around with the wire, bent it a bit this way, and then back again and I think that it is actually going to work. here are some photos of where I am at the moment. Nothing is stuck and nothing is trimmed. However, the supporting rod that goes from the wing stub, past the first fold, with a peg into it to support it and then on up to the wing tip, actually can be put in place without bending. I have to get the other wing set up and then I will glue and trim. After that, it is a case of filling and patching the paint - that's not going to be easy so I might have to live with the final finish - oh well, nothing I do is perfect so there we go! 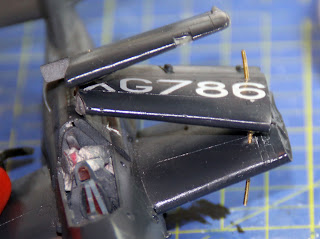 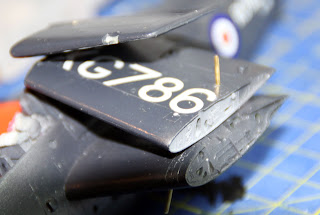 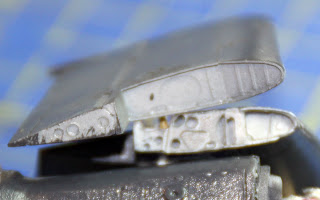 This last picture shows that I still have to get the alignment right on the upper join but this is very close to a 'done deal' as we used to say in the City.

I think that the application of some matt black paint to the bits of brass rod that show will actually disguise them enough so that they will only be seen if I point them out. Mind you, as I normally point out my faults then it is likely that they will not go un-noticed. I am sure my speed in owning up has cost me many a point on the club table in the past
Posted by Long Haired David at 2:16 PM