I managed to lose three of the undercarriage doors so I have to make some replacements.

The door attached to the port undercarriage strut was easy because I had the starboard one to use as a template. The two outer doors were a different matter because I have lost both of them!

Photoshop to the rescue. On the back of the box, there is a drawing of the underneath to show decal placement. It has the outline of the doors drawn in. However, it is not to scale.

I scanned the box into Photoshop and measured the box wing dimension and the model dimension. I determined that the box art had to be scaled by 175.61%to get it to the size of the model.

Here is the before and after. Making the doors should now be easy. 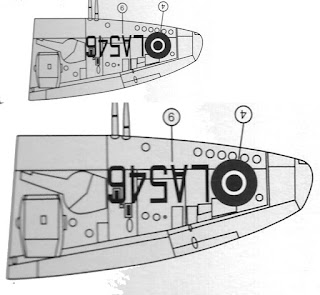 Posted by Long Haired David at 3:50 AM