The Gannet gets its first coat of primer

As CODs were painted in a dark grey blue, I have given the fuselage and the wings a first coat of my favourite primer - Vallejo Polyurethane Black. As usual, this has brought out th areas where the filling might not be as good as it should be.

Some great news though. In looking up the aircraft as supplied in the CMR kit, I find that the COD Gannet that is depicted in the kit was actually flown by my old scouting contact - John Sillett. It seems that he had a panel blow off whilst flying it. This means that, given that the Alley Cat decals have one of his AEW3s on the sheet, I will end up making models of two aircraft that he flew. Not a bad tally given that he is only recorded as flying 5 Gannets in total.

Here are the pics of the current state of play. As you can see, with total disregard to my sanity, I have gone for the wing fold option! 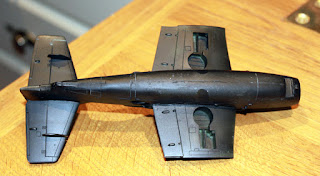 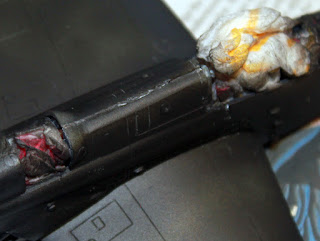 Guess I need to do a bit more work in this seam! These are the rest of the wing fold. As the middle parts will have some decals on, these all have to be painted and decalled before I can put the wing fold together.
Posted by Long Haired David at 8:51 AM