My friend Ken put me on to this one. Cheap at £40 on Amazon but -Wow - what contents.

The book is "Fleet Air Arm Fixed-Wing Aircraft since 1946" by Ray Sturtivant. 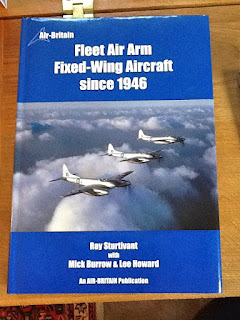 This book has 640 pages and covers every single aircraft that flew with the FAA - that's right - aircraft - NOT aircraft type! Every aircraft is listed under its FAA serial along with a description of all known activity. It doesn't show standard flights but does show any incident - from a wing hitting something on taxi through to complete write offs.

It is loaded with black and white photos and has a colour section in the middle which gives basic colour layouts for most of the aircraft included.

Lastly, it has a list at the back of every pilot that flew with the FAA with a listing of the aircraft flown.

This has enabled me to  finally track down what happened to my scouting friend - John Sillett. He is listed as flying the following aircraft - all AEW3 Gannets: XG786, XG885, XL450, XL473, XL482 and XL493. The incident that I remember John telling me about is listed as follows: "Night GCA approach, std engine failed, prop failed to feather, ditched port beam of Eagle near Singapore (Lt. JM Sillett & Lt. BM Jackson-Dooley unhurt). So now I know.

Also, I was interested in the expression std (starboard) engine in an aircraft that looks as though it only has one engine. However, the 'Double Mamba' engine was arranged with two engines side by side driving contra-rotating propellers so it actually does have a starboard and a port engine!