Here is my finished 1/72nd 251 diorama. Background - an RAF Fighter Bomber attack has left a large hole in the ground and one 251 caught so it can't get itself out - apparently only one injured though. Following on is another 251 and he is now attempting to extricate the first with a tow.

Construction
The basis of the diorama is a piece of 25mm high density insulation board (used to insulate my shed). This is great material because you can cut it, file it and even press depressions into it. The board was cut to simulate a track in the desert with both side of the track depressed. At one end I evacutated a large hole to give the 251 somewhere to drop into.This was then coated with Vallejo Desert Sand textured paint. A liberal sprinkling and hard brushing of Vallejo Dark Yellow Ochre weathering pigment and lastly some dry brushing with Vallejo Panzer Aces Leather gave the finish a lot of texture.

I then added some old 1" paint brush nylon bristles cut to length and glued on end. These were then dry brushed with the same Panzer Aces leather. I then grabbed some pea shingle from the parking area at the front of my cottage and pressed these into the ground. These got another coat of weathering pigments and dry brushing.

Models
The basis of the diorama is the pair of Armourfast 251. These come two to a box and are intended for wargaming so have few parts. This means that they go together very quickly but are missing some of the finer details. I was happy to leave most of these 'finer details' off but what I couldn't ignore was that the model didn't have a towing shackle! It's a bit difficult to have a towing diorama without some towing points so I had to scratch build those. In 1/72 two pieces of 160gsm card sandwiching a piece of 1.5mm plastic card did the trick. The towing line is three twisted strands of copper wire - yes there really is a loop at each end! The models do not come with any decals and, amazingly, I couldn't find any 1/72nd Afrika Korps sets so I got hold of a Normandy set that gave me the crosses and the numerals - it's a pity that they are consecutive. I then had to hand paint a representation of the Afrika Korps Palm on the front of each 251.

I used Vallejo Model Air Hemp as the main colour for each 251 over a Vallejo Grey primer. I then used Game Ink Sienna liberally diluted with Tamiya thinners and did a pin wash over both vehicles, highlighting the rivets and the panel lines. I then used some Vallejo Airbrush Cleaner to clean up. This also had the effect of working through the Hemp in places so that the base grey primer is exposed. This looks like sand erosion so worked well.

Both vehicles were then worked over with the weathering pigment. The one that is in the bomb hole got some very heavy applications to simulate the effect of the bomb blast throwing sand everywhere, whilst the other had a rather more muted application.

Figures
One interesting thing that I hadn't realised is that there are not a lot of dioramas made in 1/72 but there is a large amount of wargaming going on in the scale. This means that the figures available are all targeted at the gaming fraternity so each and every figure has a gun! Now, I wanted everyone to be in a non-combat situation so I had to go through and trim the weapons off each of them. I also had to move some arms to make more natural poses. The main effort in re-posing went into the injured man who was a crawling figure so basically had to be flattened out. I couldn't find any information on first aid kits so I made a box with a handle, painted it field blue and put a red cross on it. Likewise, there is a white armband and a red cross on the figure kneeling next to him. The rest are in a mix of full Afrika Korps shorts etc. whilst some have the brown jacket and steel helmet. In 1/72nd there isn't a lot of detailing going on with figures - just a reasonable representation.

Summing up
I had a great time making this. Just for once, I had a plan that I wanted to carry out rather than making something that hadn't sold in the shop. In fact, as soon as the 251 was released and I saw the box art, I knew what I wanted to do with the kit. None of model was difficult except for the fact that the drawing on the Armourfast box, which is the only instructions that you get, bore no relationship to the model as provided. The parts are different and it builds differently. It fitted very well and there was no flash. The figures were well moulded and are made of a softer plastic than most kits but not the rubbery material that Airfix uses.

The insulation board worked very well except that it didn't react well to the water based texture paint, which shrank and caused the base to bow. I tried to attach the base to a plywood board using the wonderfully named 'Gloop' which is an adhesive for attaching plastic card to other materials. Even liberal applications of masking ta[pe for extended periods wouldn't get the base to straighten out. I am going to have to make a surround for the base. As this is going to the club tomorrow night, I need to get on with this very quickly.

The rest of the materials worked very well. The texture paint is very good in representing the desert surface.

Overall, it was good fun and I think it ended up the way that I hoped. 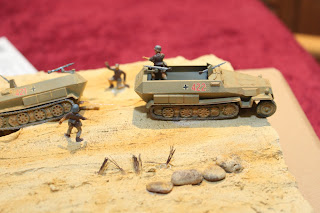 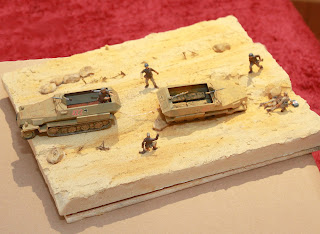 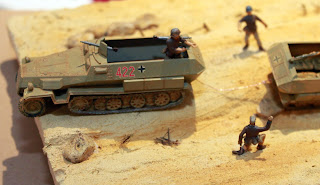 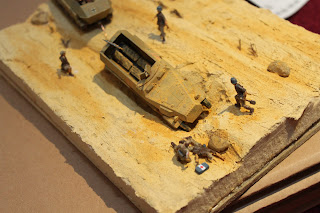 Posted by Long Haired David at 9:24 AM

This was worth keeping my eyes on, the layout and setting looks great and sets the halftracks off perfectly.