Firstly, sorry about being so quiet - I have taken up Stamp Collecting and it is taking me some time to get everything in place for it. I am still modelling but not quite at the pace of a while ago. 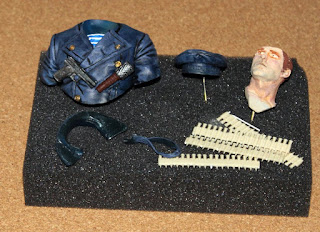 Known Future Projects
Airfix Series 1 Competition
The Ipswich club has a competition this month. It is limited to Airfix Series 1 kits built out of the box, only. I took home this Fleet Air Arm (FAA) Corsair thinking it would be easy to do - Gloss Sea Blue, limited decaling, etc. However, it wasn't as easy as that. Firstly, all the decals were incorrectly numbered on the decal sheet so I had to forgo some of the tiny ones. You couldn't read them on the instructions so you couldn't work out which was which!  There was also a problem with the wings. As I well knew and as was mentioned in the kit description which is part of the instructions, the FAA Corsairs had clipped wings so that they could fit into the hangers of the smaller Royal Navy carriers. However, the model doesn't have clipped wings. This means that I have to do some scratch building. I mentioned this at the club and got some fairly ribald remarks and it was not clear if this action would still qualify for the competition (that is without some bribing of the judge - Eric Dyke). Fortunately, this was all in good fun.

However, I am to get the last laugh I think because Kelvin pointed out that the cutting off of the wing tips was in the instructions so I had built the kit out of the box. He is right (see the photo below). 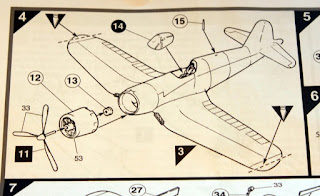 So all seems well. Here it is. 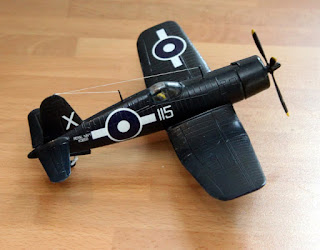 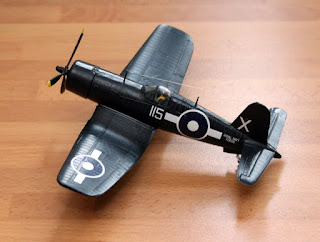 Posted by Long Haired David at 8:26 AM