Progress and an irritation with Eduard

Firstly, an excuse. I have not been doing much blogging lately because we have been busy closing down our model shop. No - that doesn't mean that SBX is closing - just the physical shop. Internet and Mail Order are as busy as ever. the time taken to close down was more to do with shifting hundreds of pots of paint - take them off the rack - box them up - put them back on the rack again! The biggest task was moving all of the computer systems but that turned out to be the easiest - they worked first time in the new location!

Distractions
My wife Valerie is a knitter but has spent a lot of time over the last couple of years doing 'latch hook' - this is a way of making up rugs to a pattern using small lengths of wool. In the meantime, she has tried other needle crafts but can't get on with them. However, she had a tapestry which she really wanted to get made. She knew that with a mother who was a frantic knitter, I had tried out all these activities as a lad so she asked me to take the job on. Here is the current state of play: 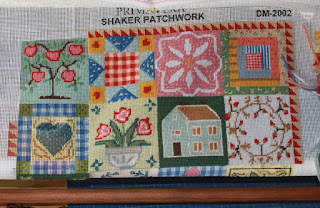 If you look closely, you can see that all of these panels have been completed except for the leftmost pair. The top left is about 60% finished and I have the one below that to start. There are three other panels uncompleted on the bottom row. As it is my first attempt, there are some iffy bits but the overall effect is quite good. I particularly like Shaker designs (I did a lot of them when I had the furniture workshop) so I am quite enjoying this. It is something that you can do and think of other things, or listen to Paul Temple tapes, which is what I do.

Back to Modelling
There are currently two projects on the go and one that I have completed.

Completed - 1/24th Shelby Cobra
This is one of my favourite cars. I was prompted to make this when I saw one in almost these colours driving around Ipswich earlier in the year. This is made out of the box with the following two major items:
I took this to the club last week but don't know what the reaction was until I see the voting. Mind you, as they only seem to like Eric's boats and aircraft, I don't expect much (end of rant - grin). Mind you, if you look at Eric's boats, you can see why - check out here . 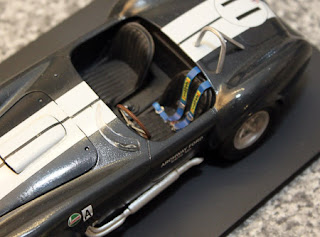 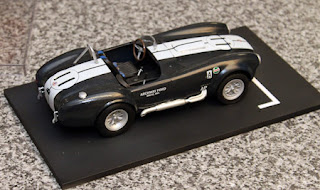 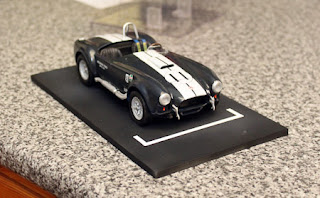 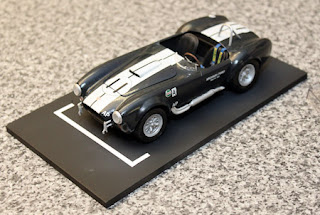 Eduard recently brought out a combo kit containing 2 P-39s with decals for a series of aircraft based in New Guinea. I have always had a liking for aircraft from this area due to the prevalence of heat and rain making things faded and dirty. What settled it was the night fighter option. A P-39 in matt black seemed to be different from the usual Olive Drab/Neutral Grey. The box comes with two kits, two sets of painted etched brass, canopy masks and about 7 decal options. Some of the etched brass is way too fiddly for me but I used the bulk of the cockpit set. Mind you as some of it can only be done with the brass, there wasn't much choice.

Here is the result. But what about the irritation mentioned in the title of this blog - see the last image! 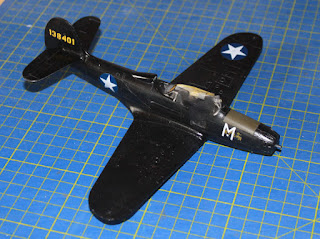 I put the decals on last night - usual Microset and Microsol procedure. This morning when I checked the results, I was horrified to find that the decals are so thin that the black shows through the white stars! 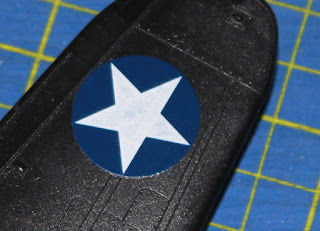 Click on the picture for an enlarged image. Still it is done now and there is not much I can do about it other than trashing the model and I don't want to do that because this one is NOT MY FAULT!

Young Miniatures Russian Sailor
This is a 1/10th bust that I am also working on. There were three difficulties with this one.
The pictures show where I have got to. In the second, you can see that I have moulded the front bandiolers - dangle them in boiling water for a few seconds and you can mould them as you wish. 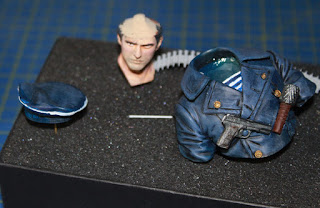 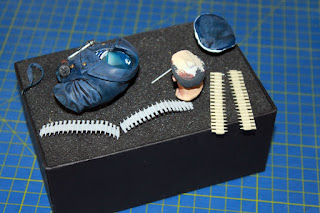 The line around the cap is currently work in progress. It is a case of add some white, touch up with blue, touch up with white and so on! I will get there. The Russian script - I am still thinking about that.

That's all for now. I am quite pleased with my progress of late. Just as a comment, we telephoned the TV Licensing people this weekend and cancelled our TV licence as we no longer watch any live TV (and I only watch F1 on a play it again for which I don't need a licence). Now I know we can really do without TV and we seem to have won our evenings back for more productive pursuits - like Tapestry!!!!!
Posted by Long Haired David at 3:27 AM