Not much activity in February

I have recently been introduced to Stargate Atlantis. My daughter, Wendy, has lent me the whole series. I have always been a great fan of Stagate SG1 but since we dumped Sky some 5 years or so ago, and also dumped our TV 18 months ago, I have missed out on this. At 2 - 3 episodes a day, I still have a long way to go. The first problem is that because it relates back to SG1, I have to watch some of that as well, and the second is that it is my plastic modelling that is taking the back seat. I am still getting on with my N-Scale railroad (see http://www.gmrblog.co.uk) however - mainly because Valerie keeps asking me how I am doing with it. She is of the opinion that me and aircraft do not go together! Mind you, this is what was said in the latest edition of IPMS-Ipswich news -

"What did the Red Indian shout as he parachuted from the aircraft? Nothing, aviation hadn’t been invented at the Little Big Horn! Dave Pennington's Geronimo showed Dave’s exponentially increasing ability with figures; always a bonus as his aircraft always seem to end up in the bin!"

The knowledge of my inability to finish an aircraft is spreading :-(

Here is a photo of the figure he is talking about 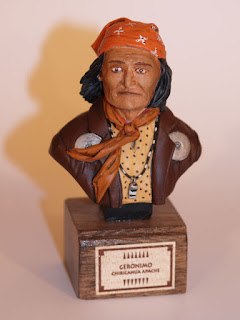 I have done some masking on the Catalina - the black de-icing boots but that is all the progress I have made.
Posted by Long Haired David at 4:01 AM