I have decided that there is a reason why I can't do aircraft. It's because I haven't found a subject to engage me as I used to. I have been making models because they have been just released, or some such. Having worked this out, 'he says!', I have picked a topic that I am interested in.

Background - when the 357th Fighter Group came to the UK they were based - well wait for it. Lord Haw Haw, on 30th January 1944, to show how good their intelligence was, welcomed the unit to its new headquarters at Yoxford. Now Yoxford is a little village 25 miles north of us on the A12 to Lowestoft, and has/had no airfield. The group was actually stationed at Leiston. Ever since, the group have been known as 'The Yoxford Boys'. I have wanted to make a P-51D Mustang from this group for a long time so when I got hold of some decals, I knew that the time had come. One Tamiya P-51D kit came off the shelf and now I am well into it.

"As any fule kno" (viz. Nigel Molesworth) I am always attracted to different paint schemes. Does anyone remember my P-38 Yippee or the bright red Hurricane? Well, it seems that due to the possibility of moving to France following the invasion, it was recommended that there be a move away from bare metal to a camouflage scheme. Hence, the 357th had some aircraft painted in what should have been Olive Drab and Neutral Grey7. However, as only RAF paints were available, they got painted in RAF Dark Green and Medium Sea Grey. Just the touch of interest that I needed.

Here is the cockpit - let's see if I can get much further, given that recently, with two aircraft, I only ever got that far. 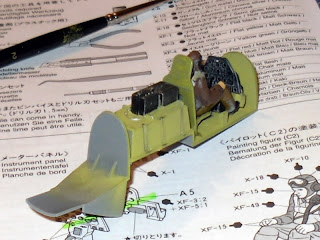 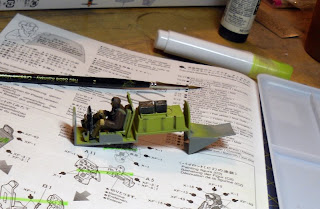 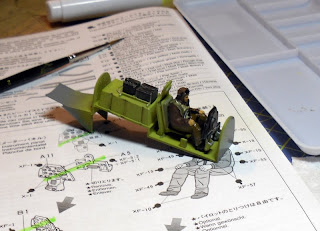