Two Beaufighters progress and the book is a disappointment

Let us deal with the book first. I was going for some sort of presentation of the life of the Banff Strike Wing but what I got was almost a rewrite of the group battle diaries with a few personal remembrances thrown in. Each chapter is a litany of descriptions of sorties, their actions and results. Because the narrative is very dry, no personalities come out and, eventually, I find myself skipping over further details descriptions of attacks.

The book has a very nice selection of images but only one map - which appears to be a railway map of north east Scotland. Given the unfamiliarity of the Norwegian coastline (although I have been to Norway, I only went to Oslo!) I could have done with a few maps showing the main battle areas.

The author could have done a better job by trying to give us the feel for the operations rather than the, sad to say, tedious details of every strike. I understand that people were dying so deserve remembrance but it could have been done a very different way. How about:
Chapter 1 - An overview of why and how the wing was formed
Chapter 2 - Creation of the wing and its satellites
Chapter 3 - The various squadrons that made up the wing
Chapter 4 - A description of the operations and how they were organised
Chapter 5 - The various aircraft that were used with descriptions (and photos - for instance, there is no image of a Vickers Warwick in the book in spite of the plane being an important part of the operations for air sea rescue)
Chapters 6 - 15 - Overviews and highlights of the monthly operations
Chapter 16 - The major (and not so major) personalities - with their reminiscences.
Chapter 17 - The achievements and tragedies (ships sunk - planes shot down and so on)
Chapter 18 - A review of the whole operation from 1944 through to the end of the war
Postscript - What happened next - units and personnel.

Now that would have made a good book!

Anyway, back to the RAAF Beaufighters. I have built these alongside each other. Spraying them both in Foliage green was quite an exercise, especially as I was running low on the colour. ere are a few images showing the build. 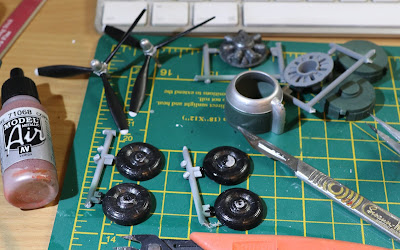 All the bits and pieces for the 1:48 version 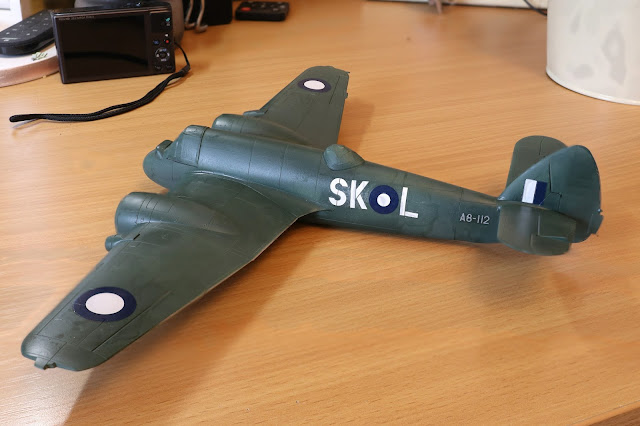 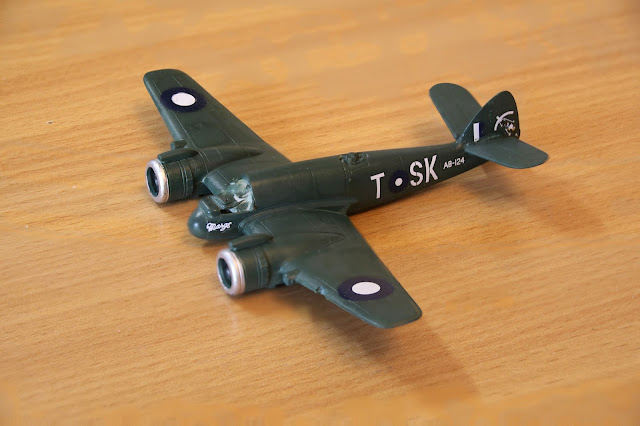 I am not normally one for research as I tend to make out of the box but, because the 1:48th version came from a set of decals, I had to do a bit of investigation. There are a few little changes to the plane but, because the Tamiya box allows for other kits to be presented, the parts were all there. However, there is one big thing that I missed. If you notice, I have shown you the port side of both aircraft. There is a big difference - the 1:48th has SK-L whilst the 1:144th has T-SK. On the other side of both planes, the codes is SK - T/L so no difference. As they are part of the same squadron, one would have assumed that they would be the same. Having tracked down photos of planes at both locations (Morotai for the 1:48th and Labuan for the 1:144th) I think that the Xtradecal set is wrong and it should be L-SK. However, I decalled the big one first and only saw the discrepancy when decalling the little one. Too late by then as I had put Microsol on the decals so they were never going to come off. Hence, that is how it must stay.

Next task is to fit them both with the rest of the engines and then give them a nice coat of matt varnish before fitting all the fiddly bits. Having looked at the 1:144th undercarriage, I am not looking forward to that part!

Posted by Long Haired David at 5:01 AM

Nice progress you're showing on the Beaufigthers.
I may have a possible solution for your decal problem with 1/48 kit.

Micro Set can also be used to remove decals.
I have used this quite recently on one of my builds were the decals were already on for about 2 weeks.
You can try to brush some Micro Set onto the decals and let it soak for some time (5-10 minutes approx.).
Then with a brush you can try to rub the decals loose.

No guarantee, but it has work for me perfectly.

Being on a pension, I can't really justify buying another set of decals. I will just have to position it carefully on my model shelf alongside the other two RAAF Beaufighters. Thanks for the suggestion, though