Why, of why, do I always mess things up? Mind you, this time I got out of it.

I explained that I had messed about with the colours. Well, I resprayed the car with white primer and then gave it a few coats of the Zero Paints Alan Mann Ford Red. I am told that this might not be absolutely accurate but as the car was run under Alan Mann's name, I think it is a fairly good guess at the colour.

I fixed the problems with the brake discs. I had broken off or cut off the mounting parts to one of the discs and both of the springs. This made complications in fitting the steering together. In the end, I drilled out all four items and replaced the bits broken off with brass rod. A bit of tweaking and bending and everything fitted into place. Not that it really matters so long as the car sits right because, once finished, I put it in a cabinet and "forget about it"!

The decals went on with too much trouble and I, finally, got the logos on the wheels to fix on the tyres. It seems like they are normal rub down but, in fact, they need to be soaked to free them from their backing paper. I didn't get them exactly in place but this is a huge step forward.

I gave the car about 5 coats of Johnson's Klear (or at least the new replacement for it) and then gave it a polish. I wanted to give it some coats of Zero Paints 2 Pack but I couldn't find the box so I had to use Klear.

As usual, I messed up on one thing that was a stand out problem. On fitting the rear view mirror, I first off used Gators Grip but I managed to dislodge it so I put a dab of Mr. Colour Mr. Cement S and that pooled out onto the glass leaving a mark. This time, instead of panicking, I decided to do something about it. I have a Micro-Mesh Craft Kit which contains sanding pads from grade 1,500 up to 12,000 along with some polish and a flannel cloth. I waited 24 hours so that the glue was dry, scraped off the offending residue and worked my was up the pads finishing off with the polish. It isn't perfect but it works for me - in any case it is better than buying a 2nd kit, which I have done before.

So here it is in all its "glory". The photos, just for interest, were taken in sets of 6 using the live view on my canon 80D. I set the focus differently on every image and then used Helicon Focus to patch all six together into one image where all points are in focus. I also take the images in natural light using the manual setting on the camera which, in this case, was set at 1/13th sec, ISO800 and F8.0. 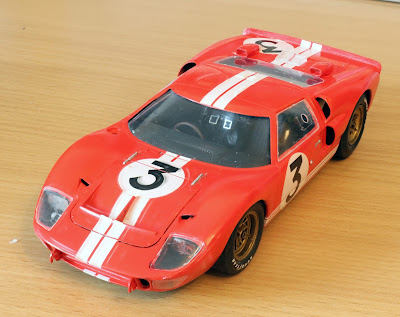 I have now sold all of my kits except for the cars - oh, and two tank kits that are partway through but I think I might just bin them as they are both way too complicated - why make one part when you can make four? I am thinking that I might make either one of my Accurate Miniatures Can/Am or maybe a Tamiya BMW635CSi next. Or maybe not - smile.

BTW, if you click on either of the images, you will get a slide show with larger copies.

Posted by Long Haired David at 9:19 AM

Great recovery! The car is beautiful