Can really be that long?

I seems that the last time I posted on this blog was back in April. Hmmm. I will have to do a bit of a catchup entry next.

I have been busy working on my Open University degree and that takes up a lot of my time. I posted the last assignment a few days ago and I am FREE until 1st October when it all starts again. You can see what I am doing by checking out my OU blog HERE.

I have started work on a Dark Star Miniatures figure called Gobzuki - a "ninja" goblin by the looks of it. This is a large figure that is extremely well moulded. 100mm high and 120mm wide! So far, I have washed it, prepped it and glued most of it together. I then gave it a prime of Mig White Primer (my favourite). 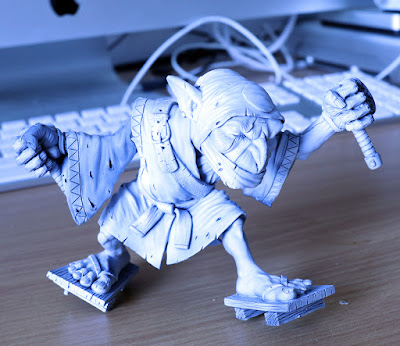 This is the box art. However, there is no historical precedent, for a change, so I can paint it how I want. As you can see, I have left the swords off for now. One is bent so I will have to straighten that as well. 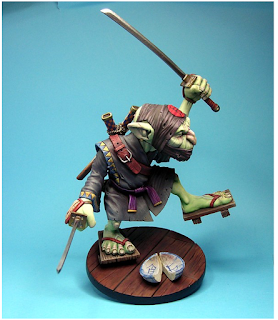 As we have (once again) got rid of the television, this will be my project for the evenings - when I am not maxing out on our Stargate box set.

As I now have 17 days before the next course starts, I also have time to build a scale model as well. Having hummed and hawed - and even starting two models - I decided that I would do something that I know so I have chosen to build the 1966 Ford GT40 driven by Dan Gurney that came 3rd at Le Mans that year, and was part of the famous three car run across the line. This car was a few laps down but it looked great. I have already built the Chris Amon/Bruce McLaren car that came first. I am pleased to see that Hiroboy has just announced that they have the Fujimi kit in stock for the Denny Hulme/Ken Miles car that came second. That is a must have so I can put all three in place. I listened to the actual race on the radio back then and was rooting for Ford against Ferrari. 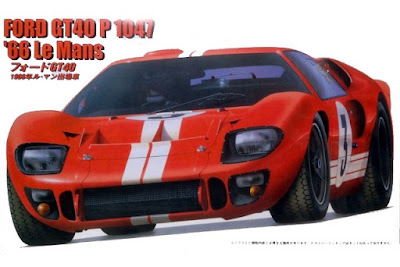 I won't leave it so long in future and keep your eyes open for my catch up entry in a few days.