Vindicator - gone where all the good planes go

I got close - so very close to finishing another 1/48th aircraft when the curse of the stupid mistakes hit - yet again :-(

Here is the Vindicator in its current condition - from its good side! 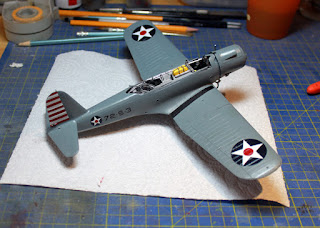 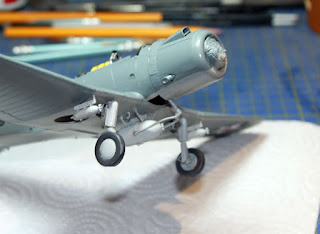 So far so good.

Now let's look at the bad side. As you can see, I didn't protect the decals with a coat of varnish so some of the unit number on the port side has come away. Also, when I was getting it off the shelf where I put it to let the tail aerial fixing point dry, I caught the front aerial and broke it off! 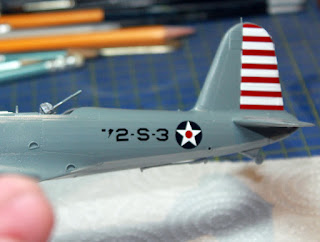 You can just see the tail aerial mounting that I fitted. 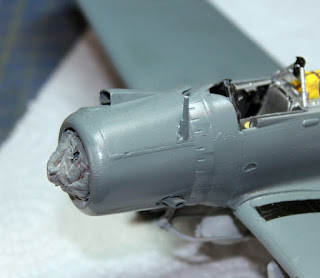 I took it all and threw it in the bin. I then had a thought that I could remake the aerial out of brass wire hammered flat and shaped (similar to how I did the Mosquito aerial) and that I could live with the decal problem. I went out to the bin but, of course, I couldn't find all the canopy transparencies.

So this one will  be finished and put on the shelf as a warning.

The club has another Airfix competition in March - series 2, this time. Let's hope that they don't keep going up to series 9 (or wherever it stopped)! I am going for safety and armour so I have chosen the Bofors Gun

It is poorly moulded (ancient tooling) and extremely fiddly so should irritate me enough. I have notcied that there is no transparency for the windscreen so I will have to scratch build that (which is a bit out of the rules but what the heck!.

For my own enjoyment, I am going for yet another Shelby Muscle Car. This time, the current Shelby GT 500. I have already got the Mr. Muscle Oven Cleaner to work on the chrome parts and hopefully will start on this tomorrow.

Posted by Long Haired David at 5:43 AM

shame about the Vindicator, it looks very good....you should have finished it and taken a load of photos from the 'good side' only..!..after all none of us would have been any the wiser..