Spot the Mistake and an Accurate Miniatures special

As part of the Colchester End Of Year, I got a Hobby Boss 1/72nd scale kit of a Eurocopter Tigre. Now, one look at the camo schemes and I would have left this alone. However, the deal is that you make what you are given. Not being able (or wanting) to do the French version, I chose the Australian Army finish.

It was tricky but quite an enjoyable build and here is the result.

Now, see if you can spot the 'deliberate' mistake? The answer is at the bottom of this entry.


Accurate Miniatures Vindicator SB2U-2
I have always liked Acc.Min kits ever since the release of their Avenger back in the late 90's got me back into aircraft modelling. Silly story but I bought the Avenger. they then pre-released the Dauntless so I got one of them. It came in a box with lots of multiple sprues and I guess you could have made at least two aircraft. However, the net result was that I finished the Dauntless but never finished the Avenger. I made a mistake with the Avenger in buyer a lot of Verlinden extra parts, not realising quite how much work you need to put into Verlinden add-ons. I then bought two of the 1/48th B-25 Mitchells (one of really favourite models - I can't wait for the 1/32 version to come out) but eventually sold both of them. I have had the Vindicator on the shelf for a long time so I thought I would get on with it.

Here is the current state of play. It is going together slowly - the cockpit was incredibly detailed and flimsy with poor instructions but I think I made it. 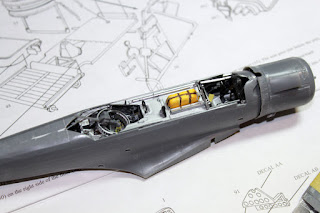 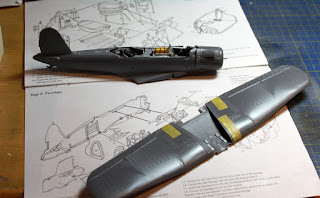 Did you see it?

I have left the tail rotor off! Unfortunately, I thought I was finished so I have thrown the rest away!

Oh well, I guess I will need to buy another kit - some Xmas present!
Posted by Long Haired David at 12:44 PM