I am a long way into what looks like being another aircraft success. This time I am building a 1/72nd scale Tamiya Mosquito. I know - how can you go wrong with a Tamiya Mosquito but, if you remember, a couple of years ago - at Christmas to be exact, I trashed a 1/48th scale one due to me trying to decal a pebbledash finish!

This time, I am making a model of something that has intrigued me for years. Why did BOAC (British Overseas Airways Corporation) fly Mosquitos during WWII? Well, it seems that they were used for maintaining communication and imports from Sweden. Sweden, being neutral, would have impounded any military aircraft and sent the crew back with a flea in their ear! So, the only way was to send civilian aircraft, which meant - NO GUNS! Flying from the UK to Sweden must have been hazardous as it was without the lack of armament. However, a Mosquito could outrun pretty much anything when it needed to so daylight flights were the norm - at least until the Fw190 came along when they switched to nighttime, as the 190 could give them some problems. Amazingly none were lost to enemy action.

For the full story, check out this web site.

So, I got hold of a kit and the recently released set of decals from Vingtor and off I went. Although Vingtor state on their web site that they only use top print shops, these decals are very thin and prone to break up. Also, they do not have a deep colour so the camouflage behind tends to adjust the colours, which is a bit of a disappointment.

You may notice that the Mosquito is painted in medium bomber camouflage, namely brown and green, rather than the expected grey and green. However, this is their early scheme - along with the aluminium colour of the underneath.

All that is left to do now is to build the undercarriage, give it a coat of matt varnish and un-mask all the glass (oh - and fit the front glass panel). It still needs the exhausts fitting but I won't be fitting the exhaust shields. These were intended to mask any glow from the exhausts but the pilots found that leaving the shields off gave them another 16 knots speed - vital when you are trying to outrun something. 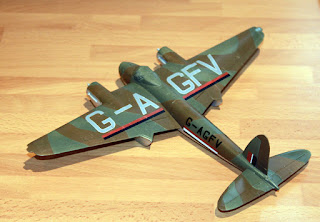 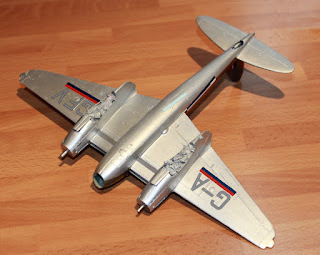 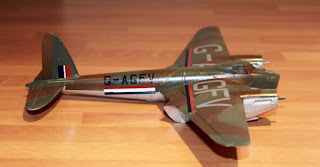 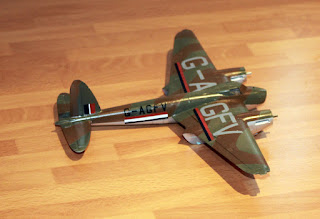 Posted by Long Haired David at 3:20 AM