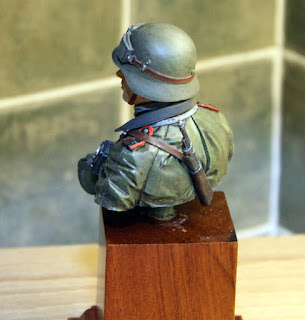 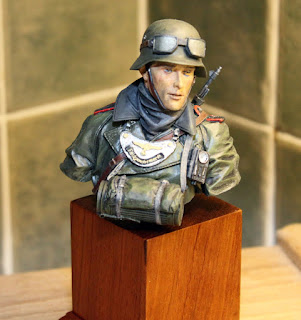 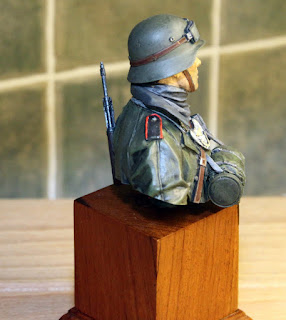 Kettenhund - Chain Dog - the
'unkind' nickname for the WWII German Feldgendarmerie, so named because of their badge of office, a gorget hanging on a chain around their neck.

My version is a Young Miniatures 1/10th scale bust. This is the same
construction as the DAK tanker I finished recently. The coat he is
wearing is a rubberised motorcycle full length coat. He is shown as he
would have been during the Ardennes campaign in late 1944 - the
so-called 'Battle of the Bulge'. Note that he doesn't have any badges
on his helmet. The Germans had worked out by now that such flashes of
colour on the helmet made ideal sniper targets!

Reprieve
I have dropped some hints to people in the shop and on e-mail that the F-16I Sufa was for the big heave-ho into the bin. This was because I was being singularly unsuccessful at doing the three colour camo using a freehand airbrush. This is exactly the same problem that I had when doing the Israeli F-16B in 1/72 scale. I decided that I was better off moving on rather than stopping so I have taken the same route with this as with the previous one - I am hand painting it. Now I have NEVER hand painted a 1/48th aircraft so I am out into new territory. I am expecting it to be a bit suspect but I am determined to finish a plane, no matter what.

This is where I am so far. 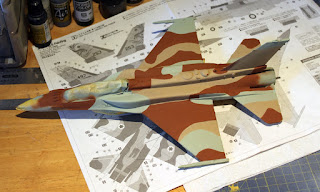 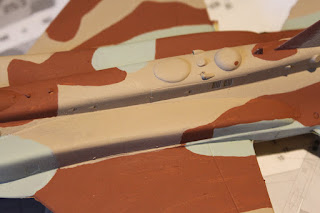 I have some way to go, mainly in masking out the straight lines. I don't think that this one will go to the club but it will probably make the shop.

Finally - two new projects!
As if I didn't have enough on the go, what with Valerie having me do Jigsaw puzzles every night! 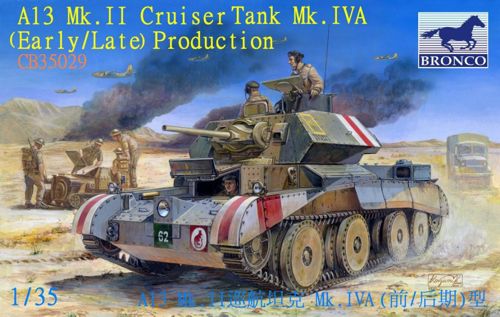 I like the colours on this one, although, having looked at the individually moulded track links, this may be more 'fun' than the Fruil tracks on the Marder!

Lastly, after Paul Casson ordering some 28mm Napoleonic Imperial Guardsmen - the Victrix set, I decided to go back to my 1970's Napoleonic roots - 30mm Hinchcliffe in those days - and try some British Waterloo Artillery.

Posted by Long Haired David at 9:00 AM

Hey David, what's with freehand airbrushing that F-16I??? What happened to good old 'saucissons de Blu-Tack' and cheapo decorator's tape? No matter; good to know it hasn't been abandoned after all.