Firstly, I have had some kind comments about my Cutlass disaster. It has determined me to acquire another kit and to finish it off as intended. Unfortunately, the kit is currently out of stock so it will have to wait a while.

In the meantime, I have moved on to more aircraft trouble. Determined to kill this problem, I am getting further and further down the simplicity stakes. As we were taking an extra day's holiday over the Bank Holiday weekend, I took a Hobby Boss HE162 Salamander home, knowing that there was a Russian option in the box which was all over light grey. There was me thinking, this will be easy.

So, this is how it coes. I get the model put together fine. I was wondering a bit about it being a tail sitter but as the body is cast in one limp of plastic, there is nowhere to put any weight anyway. I get it painted and the canopy masked up. So far so good. Now we come to decalling. I HATE decalling with a passion. I find it the most tedious activity known to man, at least in the modelling world. This always makes the process a bit suspect. Firstly, I messed up one red star so that loeft me leaving off the marking on the underside of the wing as I had to use one of those for the top wing. Then I found that a marking on the tail had folded so it wouldn't settle properly. I assumed that nobody would know what it was and you can only see one side at a time so I left it as it was - the pattern was indicernable in any case. I cambe back next day to find that the 02 on one side had moved out of alignment.

Back to the shop (thank goodness, I can open up when I want to - this was Bank Holiday Monday). I knew I had a second He162 on the shelf so I brought that home, thinking that I could make a pair, the second one in Luftwaffe markings and I could steal the Russian ones from this kit. Needless to say, I didn't take any paints, and as I don't do Luftwaffe, I don't have a collection of RLMs at home.

On went the final decals and from then on everything didn't go too badly. Gloss varnish, a couat of Pro Modeller Black Wash - my last attempt at doing panel lines - and then a coat of matt varnish. It was then that I noticed the one of the small decals on the tail(remember that one was on incorrectly) had come off in the burnishing stage of the panel line operation - needless to say, it was the good one that came off. Still I have a second set of Russian decals so I can fix that.

Back to the Luftwaffe version. I had cause to go back to the shop on Tuesday so determined to pick up the paints then. I forgot the paint list! So, I took one of each off the Vallejo Model Air rack, thinking that I can put the ones back that I don't need.

BTW, did I jmention that it turned out to be a tail sitter - hence the support from a pipette ion all the photoes. Oh, and I also forgot to mention that I broke the front protruberabce 9don't know what it is called) off during the panel line episode, so I had to drill a hole and make a replacement! 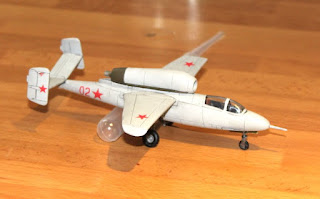 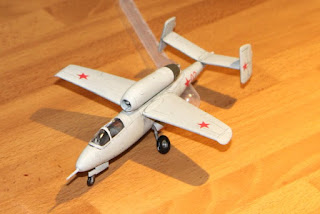 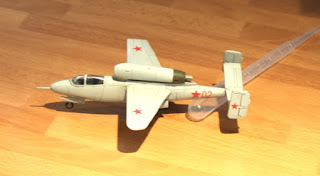 All this, and I still have the Luftwaffe version to make!

Just to show I have some skills, I also attach a photo of the state of play with a Young Miniatures figure that I am painting. This is a DAK radio officer. Somehow, I think I am better at figures than I am aircrat, in spite of making aircraft since I was 14. 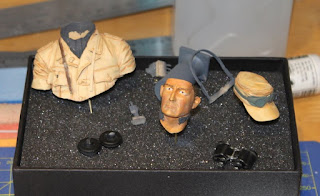 Posted by Long Haired David at 1:51 AM