At last - something to be pleased with

But first - progresss on the Salamander.

I got the second one finished but messed up a couple of decals. I then couldn't find the second kit decals so assumed that I had thrown them away. I meant to order an extra kit but forgot! This just shows how unorganised and stupid I am. However, to reinforce that idea, last night I found the decal sheet. So I have now pretty much finished both Salamanders. I have yet to put a second coat of Klear on the Luftwaffe version. This is so that I can use the Pro Modeller wash on the panels lines. If you look at the Russian one, you can see how well this works.

The fuselage of this model is a solid moulding so there is nowhere to put any nose weight. Because they are tail sitters, I intend to put them on a base side by side - maybe as an exhibit and then I can stick the undercarriage down.

I am close to finishing two aircraft without me throwing them away - Ta-Ra!!!!! 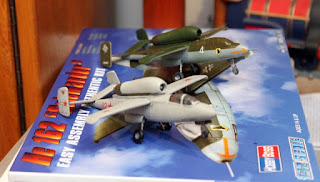 Double click on the picture for a larger image (in a new tab).

Now to my best success to date, says me.

I have been working on a Young Miniatures 1/10th bust - these must be my favourite topic for modelling. It is a Deutsche Afrika Korps radio operator. When I received it, I thought that it would be consigned to the - do it later - bin because of the compexities of the heasdset - especially the etched brass details which were tiny. I have a rule that says if etched brass is tiny the I don't try it. I thus decided that I would make him without the headset - a real copp out - but the realsied that they hadn't moulded one ear as it is inside the headset pad and that they had moulded the throat mike. So, I had to do this. Amazingly I managed it. I am very proud of this one and feel that I have finally got a good face. Also, the jacket really looks as though he has been in the desert for some time. As always, blowing the figure picture up so you can see it makes it look less detailed than it looks in real life but I hope you enjoy this image. 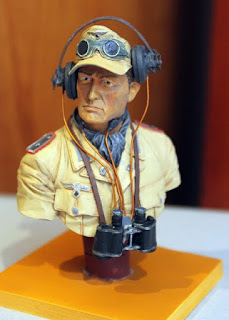 What comes next?
Well, I have to finish off the two He162s and put them on a base. Then, I have three new projects.

1. Currently underway - Hasegawa F-16 in Israeli colours in 1/48th. I just love the look of these planes in the four colours that the Israelis use. I have done one in 1/72 so this will make a pair.
2. Young Miniatures Wermacht Feldgendarme 1/10th bust
3. Young Miniatures - The Black Devil The Soviet Naval Infantry in WWII - a Soviet sailor with a bandioler of shells around his neck.

I should have some photos of the F-16 cockpit in a couple of days
Posted by Long Haired David at 2:40 AM