Pre-shading is an urban myth

I have had problems recently when airbrushing with Life Color. For some reason I don't seem to be able to get the consistency right. I started out on the Hobby Boss F-15 but when it came to painting the aggressor scheme camo, I made a right mess of it so that is gone!. Dan, I will do another one.

I am determined to make a good job of one aircraft so I have gone for the big one! The Monogram PBY Catalina is a large kit and the attraction is that it is actually a post-war OA-10A air sea rescue plane. I have wanted to do this for a long time because couple of years ago, I got a 1/144th version as my Xmas kit at the Colchester club. This model has had a pride of place in the shop since then. When the Monogram kit was re-released, it had the same aircraft on the decal sheet so I felt I had to go for it.

Well now is the time. Here is the box art: 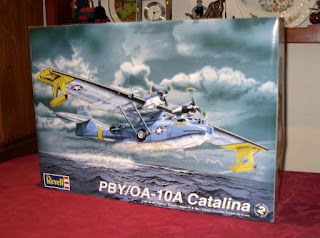 Now back to the heading. I have always felt that there was no point in pre-shading - a process whereby you spray a dark pigment along the panel lines and then put on the final coat. I always felt that you would lose the shading. However, I tried this on the bulkhead behind the cockpit and found that I could get it to work. The effect is achieved by first spraying Life Color Tensocrom Smoke. I then sprayed the final green using very low pressure with the nozzle very close to the part. I was using Vallejo Model Air which I find that I can spray at close quarters much better than I can spray Life Color. I think the the final result looks great. I have also included the two seats. however, I am planning to make this a model in flight so I will be putting two pilot figures in the seats. 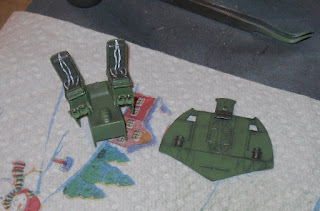