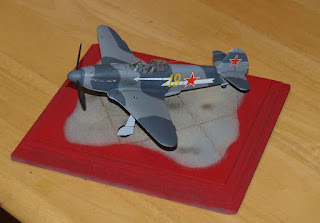 This is the Weekend kit Yak-3 done. I have to say that I quite enjoyed making it and I don't think it came out half bad. The aerial is lycra rigging thread. It was fun running that through the back of the canopy down to the radio box. I have done some weathering using Tensechrom filters. I am currently trying to use lots of different techniques to find out which work best. I am actually finding that almost any technique is worth using but I am happiest with the Lifecolor filters. Its probably because I can spray them and I have a way too close relationship with my Iwata - grin. The base is one of Chris Core's that we sell in the shop. I sprayed it rather than staining it. Not sure that the red works but. I gave it a couple of coats to let the paint sink in - then a coat of Model Air matt varnish. The concrete is actually Vallejo Pumice which gives it a nice gritty texture. I got impatient last night to get on so once I had spread that I put it in the microwave on 5 minutes defrost to get it so set so I could paint it. There is then a variety of Vallejo colours -mostly buff and German grey. This was overlaid with - you have guessed it - Tensechrom filters - oil and rust.

The T-34 for the 'Where's the Famo' diorama is coming on. I just have the turret to finish and then I can get on with the painting. Isn't it strange that, when I had my 'other' airbrush, I loved making and hated painting and now its the other way round. 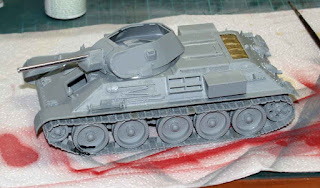 Posted by Long Haired David at 7:16 AM