Sword Fairey Gannet AEW.3 - not as simple as it looks

You may remember, a few years ago, me telling you about an ex-Air Scout colleague - John Sillett - who joined the Royal Navy and flew Gannet AEW.3 aircraft during the Rhodesia crisis. I built a model of one of the aircraft that he flew using a CzechMaster resin kit, given to me by an SBX customer, plus some AlleyCat decals.  Check out that blog post. Well, that model finally fell apart and died. I recently found out that Sword had released a plastic version in 1/72nd so I decided to have another go. 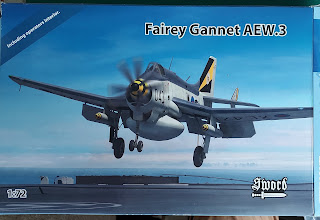 Given that I found the resin kit to be somewhat tricky, I was expecting an easy ride but it was anything but. I have a series of images rather than a blow by blow account. I will then fill you in with what went wrong and what went right.
What went right is fairly easy. Not much but I ended up with a reasonable model which, if you stand a bit further back, looks OK. The decals went on well, the basic paint job was good and the masking didn't bleed.
What went wrong?
I have ended up with a model that I really wanted except that there are some issues which mean that it really isn't possible to show it to anyone. For instance, I came in today meaning to put it on my mirror turntable and take a video of it turning. However, with the  wheel missing, it looks ridiculous. It is such a shame. I expect that I will throw it away and have another go sometime now that I know the pitfalls. Lucky that it isn't an expensive kit.
The image below was taken at the club meeting so both front undercarriage wheels are in place. 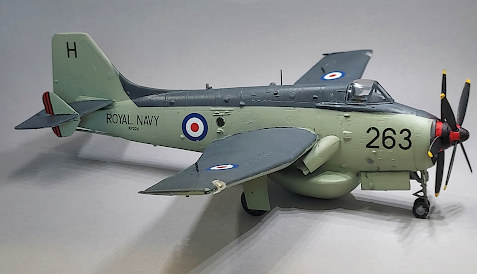 Posted by Long Haired David at 3:31 AM