Tamiya Alfa Jaegermeister - don't you just hate it when...

I decided, after I had got this far with the Lotus: 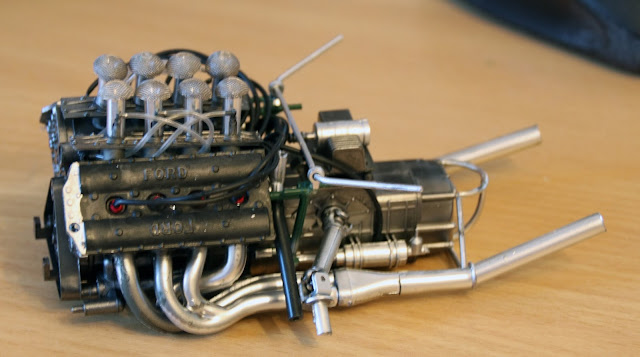 that I would have a bit of a break and do something that might result in a finished article for next Thursday's Christmas meeting (1st December 2016) of the Clacton club. I bought this kit recently from Hiroboy. I have a BMW 635CSi to do in Jaegermeister colours but I have just made one 635 so I thought that the Alfa would be different. 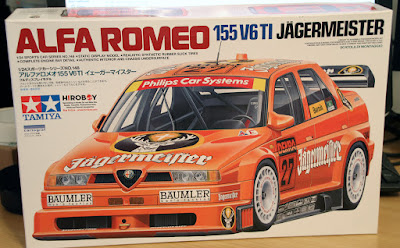 Well, it is! I have built the kit with some care and, so far, I haven't broken or mislaid anything. That must be some kind of record for me. I am well prepared because I have the correct orange as a Zero Paint in stock - I bought it for the above mentioned 635CSi. That isn't what makes it different, though. I have laboured long and hard on this. First off, I gave every sprue a coat of Zero Paints grey primer. This is 2 pack stuff so it comes with a primer, hardener and thinner, all of which needs to be mixed in the right proportions for the airbrush. Well - it was either too runny, in which case I put some more primer in - and then it was a bit thick. So thick, in fact, that I had to run it through the airbrush with the needle pulled out of the way. With the needle in place, it just wouldn't come out.

That done, all of the aluminium and the chrome parts got a shot of Alclad. I have bee playing with the Vallejo Metal Colour but I find that this doesn't spray as well as I like. I do use it to touch up though as Alclad cannot be brush painted. The upside of Alclad is that it dries almost instantly but the down side is the smell! What with the stench of the 2 pack and then the Alclad, my wife was a little annoyed at the overall smell in the apartment. I don't have an extractor and, initially, I forgot to open my window.The window is partially blocked by the model railway so it is a pain to open and close - but under the slight (ha!) pressure from SWMBO, it was opened - as was the bedroom window and we got a through draft going.

Anyway, to the nitty-gritty. With everything set up, I started and found, to my joy, that this was a true Tamiya kit. The instructions were clear, there was no flash and everything went together as it should. I worked my way through the engine carefully and made it without mishaps. I was quite pleased with it. Then the suspension went in along with all the underside parts and then I found that the underside of the engine/suspension was covered by a plate so nothing was to be seen. I turned the car over to finish the engine bay to find that a cover went over the whole top of the engine, so no point in spending the time painting up the cylinder heads, for instance. At that point, I checked the body and, guess what, there was no opening bonnet(hood) so, having done all of this work, almost all of it was never to be seen again! Now I wish that I had started taking photos a little earlier.

This is where I have got up to. I am just about to start the inside of the car so I thought that it was a good time to stop and take stock. 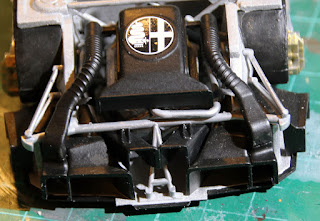 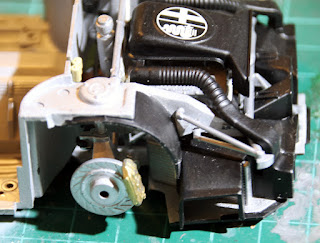 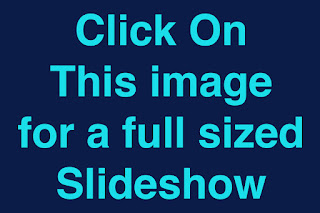 Posted by Long Haired David at 8:52 AM