The diorama base is too small!

So, I used the pumice to make the base. Sprayed it Vallejo flat earth and the brushed it liberally with Mig Russian Earth pigment followed by a spray of matt varnish to seal it.

The pumice has warped the base so it has to be re-done but just as well. From the photo, you can see that the Marder is placed too close to the edge and there is not enough room for the figures - D'oh.

Anyway, you can see what I am after. The diorama is to be called
"Warum sind sie rückwärts gefahren? 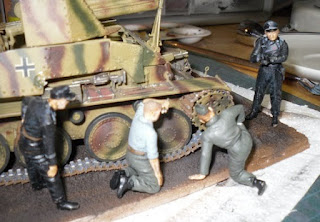 Or in English - Why did you reverse?

Next step - remake the base out of plywood and make it slightly better.

You can really see the flex in those tracks in this picture.

Thansk for making me try to remember the German I learned in school.