I was working on a model to take to Colchester last week. I didn't have a lot of time so I went for a 1/72nd fighter. We had had a Hasegawa F6 Lightning returned to the shop for replacement because it had a hole in the fuselage side. I felt that this could be filled and to save the kit being binned, I decided to have a go. I didn't realise that it was actually a rework of the old '70s Frog kit but soon found out when I saw the detail in the cockpit and the wheel wells - none at all!!!! But - hey - it wouldn't take long to make.

I got on with it and actually felt I was getting somewhere - I have been a bit depressed about my modelling skills recently - I felt I had done a less than good job on my RNZAF Sky Hawk so was a bit touchy. I did it in the three colour Medium Sea Grey, Dark Sea Grey and Barley Grey. That went on fine. I put all the decals on - not missing out any of the tiny ones. The white lines on the wings were tricky but I got them on OK. I had painted the radome Olive Drab as ordered. I came back an hour later to find that I had drawn a line of Olive Drab over the wing - right across the white decals. Stupidly, I tried touching it up with white paint instead of trying to scrape it off:-(

I called my wife over to tell and show her what a mess I had made when I noticed that the tail planes didn't fit tightly and I had missed filling the gaps. before she knew what had happened, I had brought down my fist and smashed it! Now this is very unusual for me. I am not noted for violence, nor for destroying kits - I tend to keep them even if I can see the poor job on them. I think that I had done so much soul searching about my abilities recently that I had just had enough.

Now I have that out of my system, I can show you what I did take to Colchester. I managed to put together a Hobby Boss UH-34A Choctaw in French Marine colours. Only one problem - the large F of the fuselage broke up so I left that and the other two off. Maybe Dom won't notice - Dom is the helicopter specialist at the Ipswich club. This Hobby Boss kit is quite nice. A decent interior, good panel detail, decals for the rotor tips and dropped rotors. 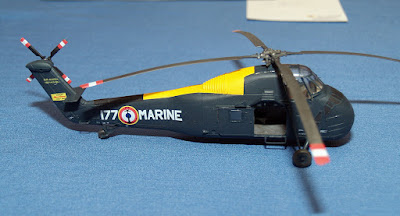 I still have to do two elements for the Land Sea and Air competition at Colchester next month. I am planning an Airfix RAF Air ea Rescue launch for the sea element. I already have my Hawk Weirdo for the Land.

The Air element is going to be the hasegawa 1/72nd PBJ USMC Mitchell. 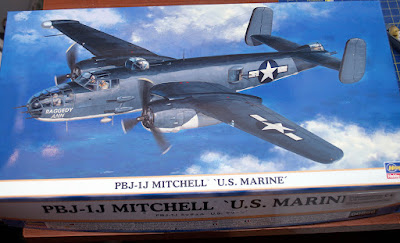 This is going together quite nicely and it seems that the fit on the wing joins is so good that I can probably paint it and put the wings on afterwards. That will help with the USMC Pacific three colour camo on the fuselage. There is a radome on the end of the starboard wing which means cutting the tip off. That's done - as you can see - and it went well. I have managed to break the rear machine guns off but it was always hope over experience when I fitted them. I can get some brass tube to replace them so that should be OK. 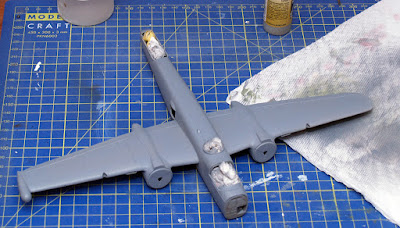 Great news from Colchester - I came 3rd in the annual competition. This was aided by the fact that I had entered on 9 occasions and scored on 5 of them. It was also helped by winning with my Ice/Beer diorama. Mind you 2nd place also entered 9 times and scored 5 so my record was good.

It's the Ipswich club on Tuesday and I am going to take the Choctaw and the Sky Hawk. I am hoping to collar Brian - who did the excellent RNZAF Sky Hawk a few months ago - to give me five minutes and tell me where I have gone wrong. Hopefully I can learn something from him.
Posted by Long Haired David at 9:51 AM

It's very easy to treat modelling as being 'in search of perfection'. Or one can have an ambition of building a model every x weeks. If you do, one can feel the frustration when it doesn't quite come off. It's a good principle however, and you shouldn't get disheartened when it doesn't go according to plan.

The mags are full of articles describing similar experiences - things knocked off, mistakes made and perhaps rectified imperfectly.