Well the plan was to make a Fujimi GT40. Firstly, I had to acquire a kit. This was an EBay job as it isn't in the current catalogue. 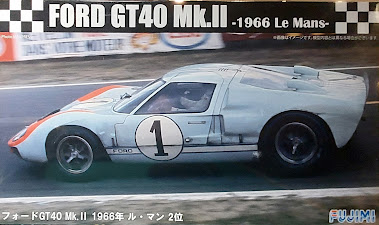 Luckily, I still had some of the paint left over so getting the right colour wouldn't be an issue. So, off I went. The whole process went very well but, somehow, it didn't click. Maybe having made three before took the shine off. I got everything done except for the glass and that's when it started to go wrong.
Firstly, my little PVA dispenser wouldn't work properly - it needs the little tube cleaning and I couldn't find any wire thin enough - so I used MicroScale KrystalKlear. This didn't hold too well so I used little MEK to get it fixed. The came the tragedy. I realised that I hadn't painted the PE grill that goes across the back of the car. I carefully masked out the surrounding area and sprayed it the correct blue. Ahhh. It's a grill! so the paint went through as well as on. Now, all of the windows had a fine coating of paint on the inside. I experimented with cleaning the back window and that just made it worse.
I decided to throw the whole thing away but then I thought that I had spent a good deal of time on the model and it was a tiny way away from being finished. It needed the front "red" hooks and the fuel filler cap installed plus the two external exhaust stacks. I squeezed the body on, with the windscreen popping out again so I took it off again. Having re-glued all the windows and having left it for a few hours, I tried again. The body went on and the exhausts went on fine. Finally, I had to fit the rear tyres. I then noticed that the nearside (UK style) front wheel had become detached from the brakes. So, of came the body - again!- and the wheel was refitted. The body then went on without issue so now it was finished.
Was it worth finishing? I think so. How does it compare to the Meng version?

Firstly, you can see that the Meng is higher than the Fujimi.  (You can enlarge any image by clicking on it).

Next, you can see that the decoration panels are different colours. Looking on the internet it is really inconclusive because it depends on how the photos have been processed but it look likely that the Meng option is nearer to the right colour. 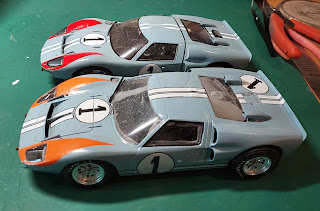 The other main difference is in the shape of the back window. The Meng is much squarer than the Fujimi but I can't find and real reference to back either up. The final difference is in the build - the Meng body is designed slightly differently. It has the lower parts to the body fitted to the chassis so that there is a break line between it and the upper part. On the Fujimi it is all a single moulding. This looks better, in that there is a distinct gap on the Meng. However, I was unable to get the body to sit down on the chassis satisfactorily so it looks worse. Plus the engine cover is pivoted on the Meng, which is a nice idea as, supposedly, you can lift to see the engine. However, it doesn't sit down correctly and the breather on the engine catches on the body panel making it difficult to lift it out.
Overall, they both went together well and were both fairly enjoyable builds. I went for the Fujimi because ~I didn't like the way the three body parts fitted on the Meng but having messed up the Fujimi windows, its the Meng that looks better. Oh well!
Anyway, here are the business shots of the Fujimi. 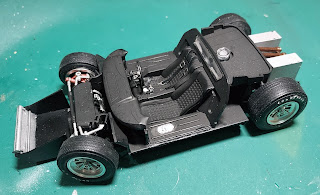 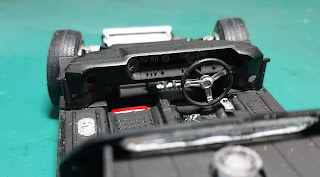 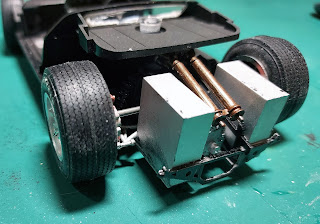 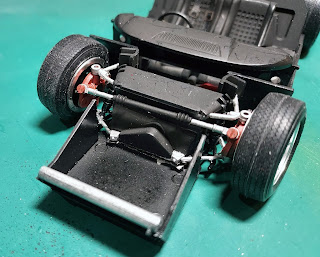 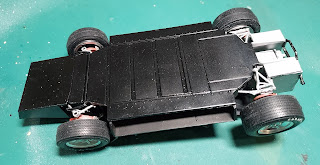 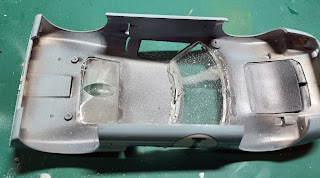 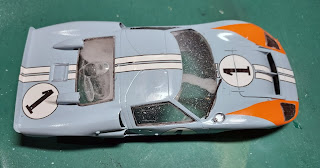 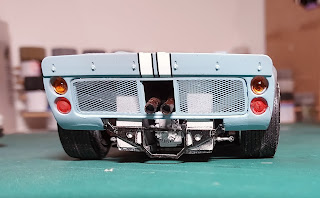 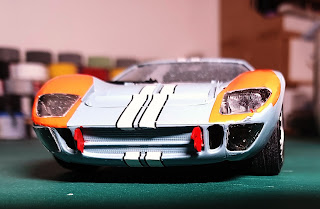 I have a Tamiya Mercedes GT3 in the stash so that might be next as I already have the right Zero paint colours and some interesting decals. However, I have a Ford Mustang coming as an Xmas present which I hope to build as the Bullit car. I am also hoping for a 1968 GT40 and a Tamiya Mustang GT4 as extra presents so it looks like car heaven for a few months.

Posted by Long Haired David at 4:16 AM