When I was at the Ipswich model show, at the Sphere stand, I picked up a set of Vallejo paints for WWII Coastal Command. My friend Mark, secretly, purchased an Airfix 1:48th Hawker Sea Hurricane so that I had something to paint. I took it home and started to make it. I made a big mistake in that I put the undercarriage on before I had finished painting. In that process, I managed to break one of the undercarriage legs!

I spoke to Airfix and, for the princely sum of £2.00, they sent me a replacement leg. If fact, they cut it off the sprue so it was all that I got - not a service as you get from The Hobby Company (Tamiya importers) who will send you a whole sprue! I was showing my wife what the problem was when I dropped the plane and broke off the other leg. Oh well, the time had come to make a flying version. To do this, I needed a stand so I got one of the nice Trumpeter stands. Now, have a look at the finished photos and tell me what is missing? 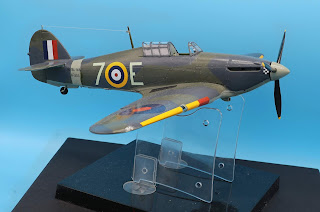 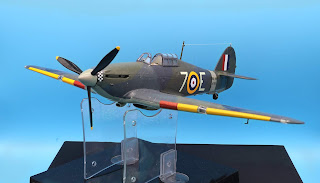 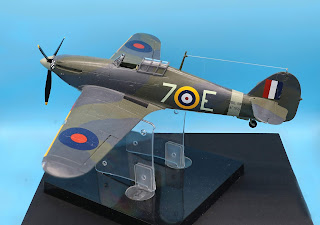 Yes, it needs a pilot! I don't normally fit figures into my cockpits but this looks a bit silly so I will have to retro-fit one from the kit. Fortunately, I haven't thrown the old sprue away yet.

BTW, the photos were taken in my new photo booth. This is a box of about 60cm - 24" cubed with the sides all velcroed so that it can be dismantled easily. It has the facility for fitting backdrops - here I have used the supplied blue one. Inside is two rows of daylight LEDs to light the model. As you can see, it works very we'll. There are no obvious shadows and I haven't had to adjust the exposure or colour setting in Photoshop, which makes a change. As usual, I have used image stacking to get the focus on all of the points of the model - these are comprised of 5 images each.

Once, that was finished, I started on the first model for my Banff Strike Wing trilogy. I did start on a Mosquito some time ago but made a mess of it so a replacement kit is in the chain. The first one is a NA Mustang IV (P-51D in US terminology). This is interesting because I have had to do some research. What me? See my description of this blog to find out my normal attitude - out of the box is all! Anyway, it isn't possible to purchase a Banff Mustang (65 Squadron flew top cover out of Peterhead for the majority of raids - Mustang IIIs and then Mustang IVs). Through Britmodeller, I found an image of a plane that had been crash landed in Sweden so I had something to go on. 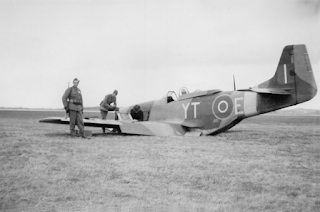 As there are no decal sets for this, or any other 65 Squadron, plane, I had to purchase sets of individual codes and numbers to make the YT-E and KH695 (seen if you look carefully under the tailplane). There was two other problems. One was the camouflage scheme - the so-called firewall pattern. However, on investigation, it seems to be a mirror image. The second problem was the colour of the paints. It seems that these Mustangs were delivered directly from the USA so they didn't get painted in standard RAF colours - Green, Ocean Grey and Medium Sea Grey. In the end, I ordered some Xtracrylix paints from Hannants as follows:

The kit went together very easily, with a couple of exceptions. The mouldings are so fine that some things are too delicate. Both the control column, from the cockpit, and the aerial on the upper fuselage both broke into bits as I cut them off the sprue. As a result, both are small pieces of brass rod cut to size.

The decals were fun to put on the model. All I could use from the kit decals were the wing and fuselage roundels plus the tail fin markings. The YT-E had to be cut individually from a sheet of sky code letters. The most difficult part of the build was putting the KH695 serials on to the fuselage under the tailplane. As each letter/number is just 1/8" high - 3 1/2 mm approx, I placed a piece of masking tape along to guide the base. However, the difficulty was compounded because the olive drab and the dark grey made it very difficult to even see the decals as they were being applied!

The kit decals included the yellow facings to the wings but experience tells me that these are very fiddly to get into place so I masked them up and sprayed Tamiya Flat Yellow instead.

It is finished so I can now get on with the Banff Dallachy Beaufighter. 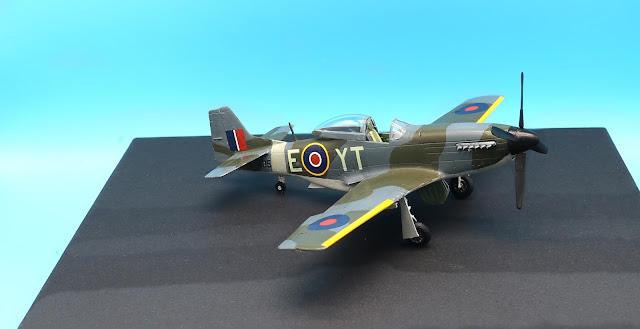 BTW, there are some discussions on the internet as to whether they kept the shrouds in place to hide the exhausts but, like the Mosquitos, who had similar issues, I believe that they took them off as they gave the plane a few more knots speed. Also, it seems that some were fitted with skinny propellors. Well, I have no idea so I went with the kit ones. All in all, I am very pleased with a kit that cost the grand sum of £9.99. Mind you, I did spend £23.00 on decals and paints!